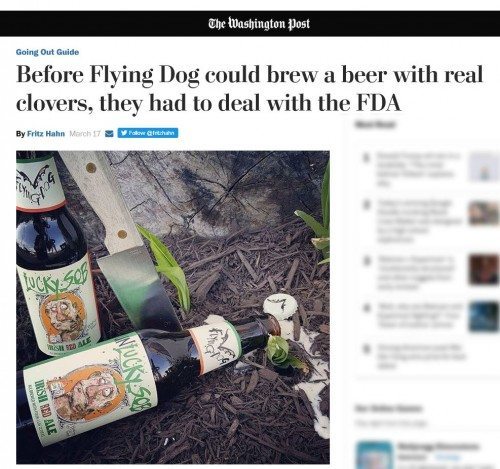 Here is a fun little article that combines a few of my favorite things:  beer, law, The Washington Post and four-leaf clovers.

The article tends to say that Flying Dog had to skirmish with FDA a wee bit, before getting the go ahead to put the clovers in the beer. From the article, I can’t tell if the issue was clovers in general, or only the lucky ones.

The article also hints at other quirks in the law. It says Flying Dog submitted the beer to FDA for approval, but this seems unlikely. I can see this Maryland brewer submitting a formula to TTB for approval, but not to FDA. Also, I would have expected to see a TTB approval for the label, but I can’t find one, and this must signal that Flying Dog only plans to sell this beer intrastate, in the near term. Mostly, this beer probably signals a good excuse for a St. Patrick’s Day-timed press release.

Even though clover seems pretty common, not so new, and generally recognized as safe (whether in 21 CFR 182.10 or via common sense), this article does serve as a good reminder that brewers can’t just use any article that is lying around the field or the grocery store. Some things need a TTB and an FDA ok first.

Update. Hark. I got lucky. A nice person alerted me that the COLA is here.