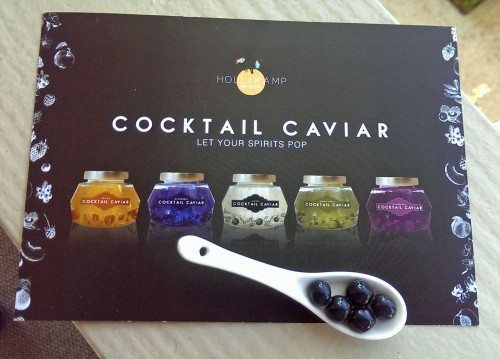 Here is an innovative new spirits product called Cocktail Caviar. It is “burst-able pearls of naturally flavored spirits.” You can toss them in some wine, or freeze them and add them to other drinks. The product is so new that there is not much about this product on the web so far.

If I understand correctly, these chickpea sized “pearls” are a giantized version of the tiny booze droplets that make up Palcohol. Here, the alcohol is encapsulated in a layer of kelp and so it not quite a liquid and not quite a solid. Maybe there is shock fatigue after the Palcohol surprise, or the size of the pearls makes an enormous difference, or it’s the upscale marketing — but it does not seem like this product is bound to raise hackles the way the powderized product has. Steven Hollenkamp, the man behind this product, explained that part of the appeal of the brand name is that “caviar” is not at all likely to appeal to minors.

I happened to meet Steven this week and he explained:

We worked diligently with TTB getting Cocktail Caviar approved. This included 240 emails, dozens of phone calls and several in-person meetings with TTB administrators, one of which was a lengthy sit down meeting with several high-ups at TTB Headquarters in DC. They were on top of it and met me half way. As a novel product, we felt being an open-book in terms of information and documents, as well as with the long term Cocktail Caviar vision, was the best way to cultivate a healthy long term relationship with TTB. I mean that, and while that may seem like a simple idea, you’d be surprised how many brands use a more guarded approach, trying to snake through the rules in a way that can only irritate TTB formula and COLA specialists.

TTB approved seven flavors of this product last month, and one of the approvals is here.