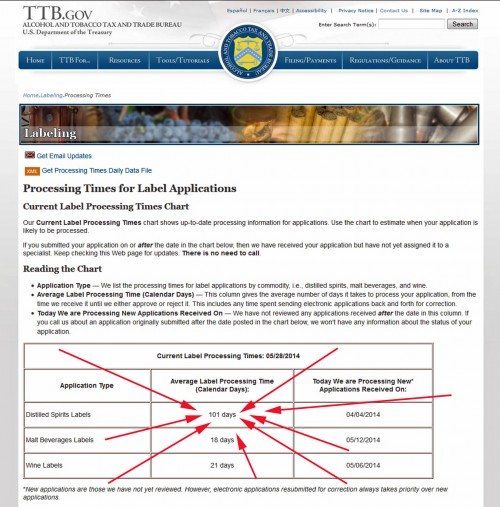 A short while ago I went to see why “that easy label” is still pending, after filing it while snow was still on the ground and waiting well past spring, into summer. I was shocked* and horrified to see the above. The average processing time for spirits labels is now, as of today, way past a month or two. I am startled to see it’s past 100 days. I don’t recall it ever getting past 45 days or so, back in the days of shutdowns, Rep. Gingrich fighting with President Clinton, Tea Partiers fighting President Obama, and so forth. I find myself talking about the same pending labels, over and over again, week after week and month after month.

It is starting to feel like a crisis for many spirits companies, so far as I can tell. Maybe the big ones can plan around this and tolerate this, but waits of this magnitude are devastating for most companies, from what I can see. Why all of a sudden? Wasn’t the power of the internet and computers, and streamlining, supposed to do approximately the opposite? For those highly interested, we have an internally prepared chart showing how this has gradually or not so gradually gotten worse over the past 7 years. It is available upon request.

My main purpose in grabbing the above screenshot is to hold out the vague, possibly naive, hope that this will mark the low point, and things somehow will get better from here. I look forward to the day when it will be hard to believe it ever took more than three months to get an “easy” whiskey label approved. Just like it is now hard to believe it ever took less than a few days (way back, decades ago). On a brighter note, it is currently taking less than a month to get a wine label approved.

* Even though the number above clearly says 101 days, and the labeling division’s phone message says the same as of today, it seems this can not possibly be correct based on the date to the right of the total. In any event, something is clearly wrong, in a protracted way. Though all this is fairly hard to believe, it is clearly true that TTB approved 667 DSP labels in the 4/26 to 5/26 period of 2013 — and only 41% as many in the same time period of 2014 (272 labels). In the same month of 2012, TTB approved 731 spirits labels. This spirits label, by way of example, took nearly six months.

Filed Under: alcohol beverages generallyTags: APTs, procedure, speaks for itself