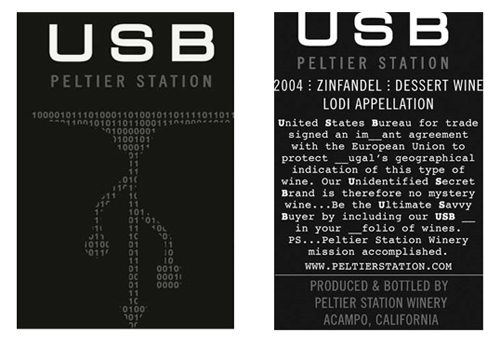 If you are lucky enough to have a wine approved before 2006, you can call it Port. But if it’s made outside Portugal and you don’t have an approval before 2006, you are out of luck and will have to find another name. Schatz Farms went so far as to show a “USB port” and call it “USB” when foreclosed from simply calling their Lodi dessert wine “Port.” The label says the US:

signed an im____ant agreement with the European Union to protect ____ugal’s geographical indication of this type of wine. Our Unidentified Secret Brand is therefore no mystery wine. . . .

Kobalt refrained from calling their Napa Valley dessert wine “Port” and instead described it as “wine made in the same ‘old world tradition’ as that of the country to the west of Spain.” Another example is here:  Not Starboard. By contrast, for an example of a California wine “grandfathered” and therefore able to brandish the term Port, there is Portacinco Port. TTB approved it with this qualification:

Approved under the “Grandfather” Provision of the Agreement between the U.S. and the EC on Trade in Wine, by enacting the Tax Relief and Health Care Act of 2006, signed on 12/20/2006. 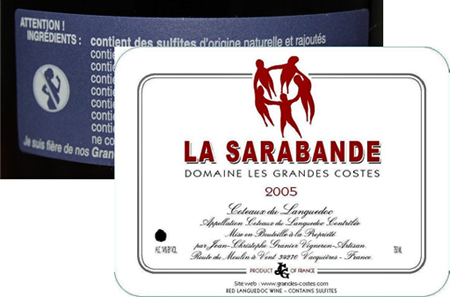 It seems like TTB has eased up on various issues in recent years, and we will try to show this trend in the weeks to come. But there are still plenty of areas where TTB is quite strict. For example, good luck if you want to talk about vitamins or beneficial effects. TTB is also quite strict about the little lady above. She’s not allowed in the US. The blue label is a non-US label. By contrast, on the white label, TTB insisted that the importer obliterate the logo. TTB said: “When new labels are printed, the pregnancy logo must not appear on label and can not appear marked-out with a black marker.”

“We do prohibit the French (or any other country’s) government health warning,” Arthur H. Resnick, spokesman for the U.S. Alcohol and Tobacco Tax and Trade Bureau said in an e-mail. “We feel that consumers are likely to be confused and possibly misled by a proliferation of government warnings.”

Not Port Wine from Portugal
by Robert C. Lehrman on October 7, 2008 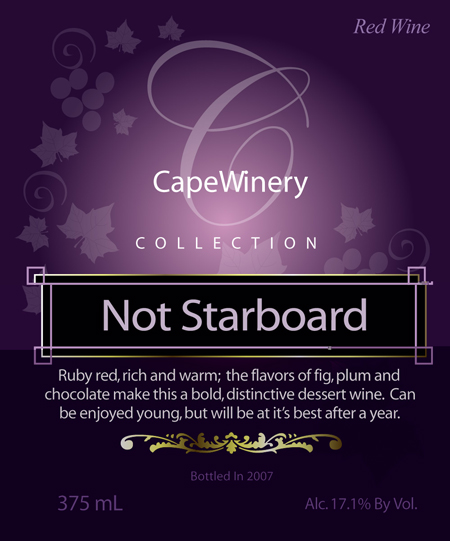 It appears that this winery was not allowed to call their 17.1% alc./vol. dessert wine a Port Wine, because it’s made and bottled in Florida rather than Portugal. But rather than give up and call it something boring, they found a witty but fairly subtle and lawyerly way to get their point across.