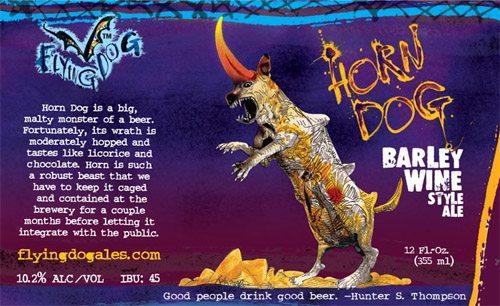 Beeradvocate shows over 400 barleywines, from the US alone. Because this type is common, but not nearly so well known as stout or rum, for example, we wanted to take a closer look. Beeradvocate says:

Despite its name, a Barleywine (or Barley Wine) is very much a beer, albeit a very strong and often intense beer! In fact, it’s one of the strongest of the beer styles. Lively and fruity, sometimes sweet, sometimes bittersweet, but always alcoholic. … English varieties are quite different from the American efforts, what sets them apart is usually the American versions are insanely hopped to make for a more bitter and hop flavored brew, typically using American high alpha oil hops. English versions tend to be more rounded and balanced between malt and hops, with a slightly lower alcohol content, though this is not always the case. … Most Barleywines can be cellared for years and typically age like wine. … Average alcohol by volume (abv) range: 8.0-15.0%.

Wikipedia provides additional details : “In the United States, barley wines are required … to be called ‘barley wine-style ales.’ Though this could be taken by some to imply that they are not truly barley wines, in fact it only means that they, like all barley wines, are not truly wines.” Bass was first, around 1900, and the term stems from the fact that many barleywines have an alcohol content similar to that for wine.
The above label nicely demonstrates the US “requirement” to add “Style Ale.” Based on this TTB definition for “wine,” we don’t see why it’s so obviously beer rather than wine:  “When used without qualification, the term includes every kind (class and type) of product produced on bonded wine premises from grapes, other fruit (including berries), or other suitable agricultural products and containing not more than 24 percent of alcohol by volume. The term includes all imitation, other than standard, or artificial wine and compounds sold as wine.” We do acknowledge, however, that this definition (for “malt beverage”) probably fits better.