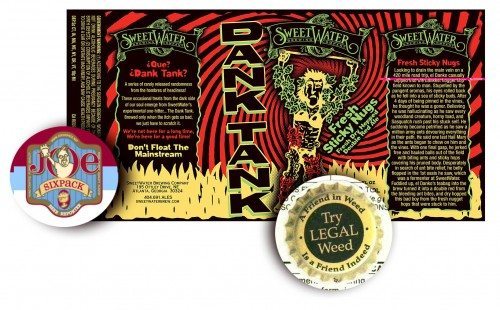 With this month’s ballyhooed legalization of marijuana in Colorado, some beer makers are adding playful drug references to their brand names and labels, and regulators can do little to censor them.
Label oversight, a quirky if contentious area of federal alcohol law, has confounded breweries for years with often capricious standards that bear little on consumer protection.
Federal law, for example, oddly prohibits the use of coats of arms or wording that promises ‘pre-war strength,’ whatever that means.

Yes, there are limits. Dark Horse Brewing, in Michigan, lost its bid for Smells Like Weed IPA, though its hops, in fact, smell like pot. The name was later changed to Smells Like A Safety Meeting IPA. (A ‘safety meeting’ is slang for taking a break on the job to light up a doober.)
But expect to see fewer of those objections as more states move toward legalization.

Joe Sixpack has at least 16 label examples here and here.