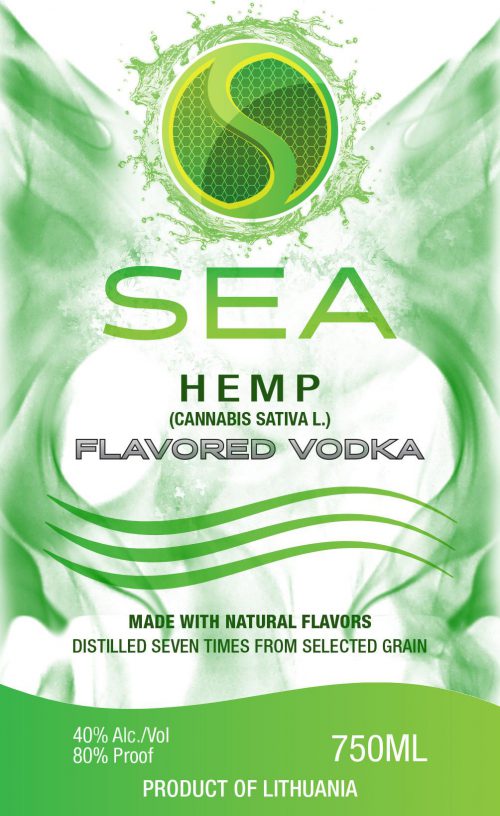 TTB approved this label July 18, 2017. There are very few other TTB labels that mention CANNABIS and SATIVA. Perhaps this product has hemp seeds, along the lines of this 2014 label approval. Then again, perhaps the Lithuanian product merely tastes like hemp or cannabis, as a literal reading of the label would suggest.

Though I see a few signs of cannabis and hemp, in recent approvals, I am not seeing any that mention CBD (aka, cannabidiol). CBD is one of many cannabinoids in cannabis; it is usually viewed as not intoxicating, though it may have various other impacts on brain function. This April 20, 2017 article does a good job of explaining about the barriers to seeing CBD in an alcohol beverage product, or on the label. 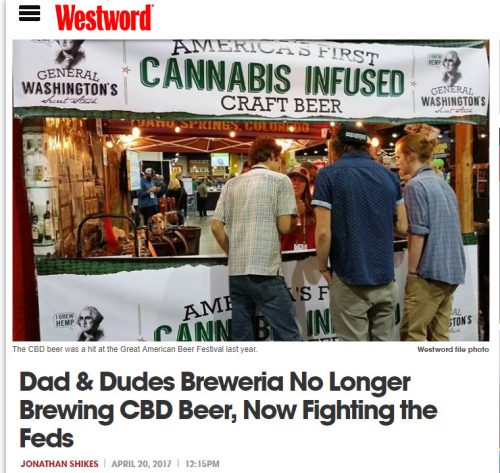 Although Dad and Dudes (“D&D,” the Colorado brewer) probably wanted to market something along the lines shown in the photo above, the actual federal approval is quite a bit less adventurous, as in the label image here. 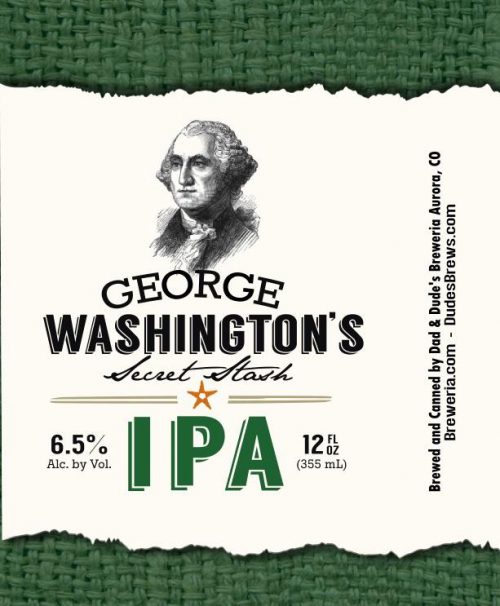 The text near the green arrow, on a related approval, tends to show that D&D grudgingly banished the “additive(s)”. 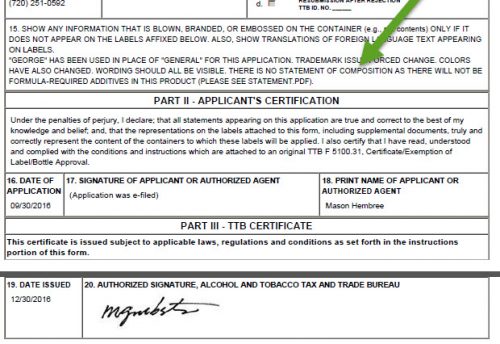 will be fighting the federal government over a beer brewed with non-psychoactive CBD. …

Last September, Dad & Dudes was the talk of the town when it became the first brewery in the country to gain approval from [TTB] for a non-THC, cannabis-infused beer. The process took about a year, because the TTB required a thorough analysis of the ingredients and the recipe before it would give formula approval for Dad & Dudes’ patent-pending process and its beer.
[D&D] then announced plans for a new beer, General Washington’s Secret Stash, which would be brewed with cannabidiol — a hemp extract also known as CBD — and distributed in [a few states].

But on December 14, the U.S. Drug Enforcement Administration surprised the hemp and cannabis industries nationwide by declaring that it still considered marijuana derivatives like cannabidiol and hemp extract — even the non-psychoactive ones — to be Schedule 1 substances, just like marijuana. The announcement meant that these substances couldn’t be sold or carried across state lines, even if they are legal in some states.

It also meant that the TTB, which had granted formula approval to Dad & Dudes, no longer wanted the brewery to make the beer. The bureau gave the brewery ten days to surrender its formula.

TTB’s hemp-related policy is here and seems to date all the way back to 2000, a startlingly long time ago, in view of all the change swirling around these issues. DPF’s Lex Vini blog provides a good reminder about why it would not be prudent to plow ahead and make such products, before the policy gets thrashed about or modified:

California newspapers have recently reported on in-state breweries and wineries that are making CBD-infused products.  Given TTB’s treatment of Dad & Dudes Breweria, however, it is clear that the federal government believes that any such product requires a TTB-approved formula.  Moreover, given recent statements by the U.S. Attorney General, it seems unlikely that the current administration would permit TTB to grant formulas for the production of a product that involves the infusion of a Schedule I drug.  Producers engaged in making CBD-infused alcohol products absent a formula may be putting their federal licensing at risk until such time, at least, as the DEA changes its mind about the classification of marijuana extracts.

Watch this space for changes to the U.S. CBD policies.