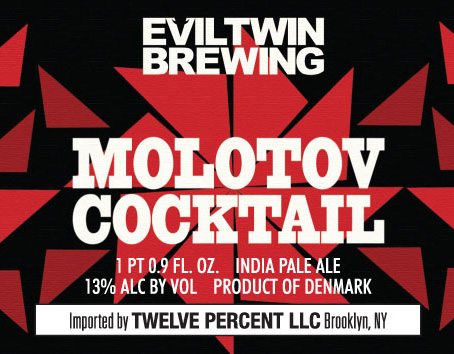 Because the term “Molotov Cocktail” has been so widely used (for at least 70 years), I would have expected somebody to grab onto it and apply it to alcohol beverages sooner. It was not until July of 2011 that somebody grabbed onto it, as in the case of Evil Twin Brewing above. In this case the name relates to the “explosive” and “arrogant” amount of hops in this beer. A few years earlier, Molotov Hoptail had roughly the same idea. Hoptail gets extra points because the brewpub is just down the street and a delightful addition to the neighborhood.

I probably would have expected the term to get applied to something more akin to a traditional “cocktail” and less akin to a traditional beer. But perhaps TTB would have been concerned about the use of cocktail-type language on a spirit that is other than a “recognized cocktail.” TTB has various rules about recognized cocktails, such as pre-mixed margaritas, daiquiris and the like. For example, the BAM says a daiquiri must contain rum and lime, and a margarita must contain Tequila, triple sec and citrus. A few of these cocktails are vaguely reminiscent of the above, at least as to sound: Black Russian, White Russian, Brandy Alexander, Bloody Mary.