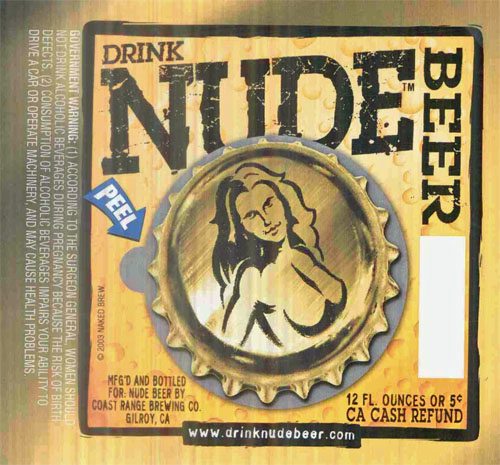 One might assume that beer + naked women is a nearly unstoppable combination. But it did not work out that way for Coast Range Brewing. It looks like the Gilroy, California purveyor of Nude Beer is long gone. Their last COLA was in 2006 and their last Nude Beer approval was in 2004. There is no sign of the company at the web address above. In all, the company got about 23 approvals for Nude Beer before fading away.
Coast Range provides a clear lesson that it takes a lot more than unclothed women to sell beer. In case it’s not obvious from the above image, the idea is that you buy the beer and then peel off part of the label to reveal a woman with little if any clothing. A slightly blurred example is at the end of this sentence but don’t click it if you don’t want to see nudity. This kind of stickering is a good option for companies that want to show something more than the government and retailers might otherwise allow. We wanted to capture it before it fades into ancient history. This also shows that the system has a lot of checks and balances, such as the market, and the government doesn’t need to carry the entire burden.