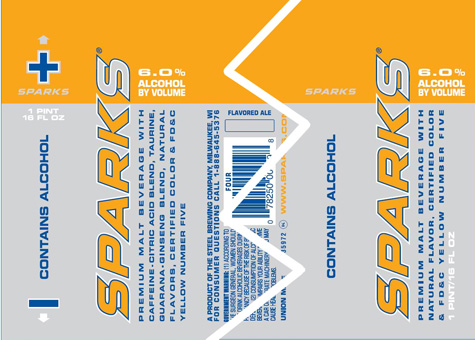 Sparks is all but dead. Today 13 Attorneys General announced a settlement with MillerCoors. The settlement covers this well-known brand of malt beverage with caffeine, taurine, guarana, ginseng — and essentially removes it from the US market.
The old label, in use from about 2001 until today, is on the left side above. The new label is on the right. The battery symbols, caffeine (and other ingredients) are banished.
The settlement calls for MillerCoors to reformulate Sparks and change the labels within three weeks. It also requires MillerCoors to pay $550,000 in fees within five days. Upon announcing the settlement earlier today, Connecticut Attorney General Richard Blumenthal said:

“Sparks is an insidious and insane drink that deservedly now is down the drain — like all stimulant-spiked alcoholic drinks should be,” Blumenthal said. “Beverages like Sparks are a witch’s brew of alcohol and caffeine, energizing drunks and encouraging dangerous, even deadly behavior. Common sense says a drink impairing judgment while conferring excess energy is a very bad idea. Studies show that these drinks lead to binge drinking, car crashes, sexual assaults and other risky behavior. They impair reactions and reasoning, but instill the illusion of alertness and energy.”

The settlement is so far-reaching, it even includes newer MillerCoors products such as Rize.