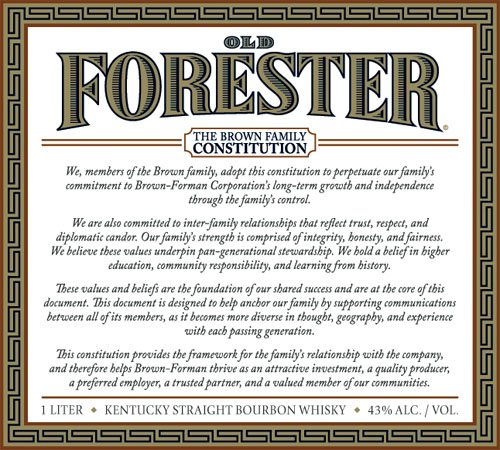 The Brown Family printed their Constitution on this Bourbon label, and the government ratified it late this summer.
The main point of the document seems to be keeping the publicly traded company under family control. Barron’s has estimated that “The Brown family owns about 70% of Brown-Forman’s Class A voting shares (BFA).” Six months ago The Wall Street Journal reported:

the only bourbon legally produced and sold before, during and after Prohibition. From 1920 to 1933, its distillers held one of only 10 government permits that allowed production of bourbon for medicinal purposes. … When Prohibition was enforced, there were more than 200 distilling operations in Kentucky alone—all put out of business in one fell swoop. … The Old Forester strain of yeast is the oldest strain of yeast in the industry.

The Barron’s article, from a few years ago, says “Brown-Forman’s fortunes hinge on Jack Daniel’s, which accounts for some two-thirds of profits. … Brown-Forman might not exist today, save for its purchase of Jack Daniel’s for $18 million in 1956.”