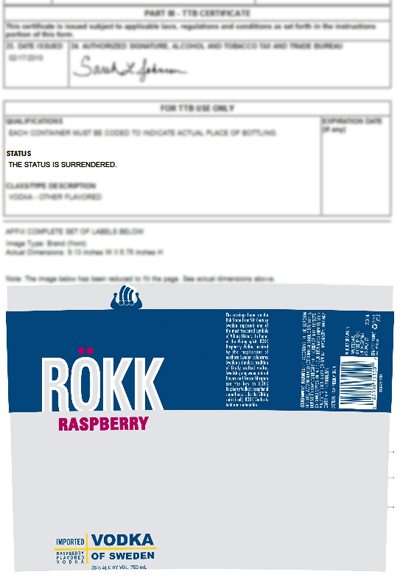 How big is your vodka?
On this label, VODKA appears to be 2-4 times more prominent than RASPBERRY FLAVORED VODKA. This disparity was apparently too much, and tipped the scales toward the surrender of this and many other Rokk brand flavored vodka labels recently. For quite some time, TTB has been concerned about the relative prominence of this coveted term (vodka) — especially on products that are not technically “vodka.” The federal standard for vodka is quite restrictive and surely allows for nothing like raspberry flavor. In fact, only a bit of sugar and citric acid are allowed in true “vodka,” nothing more. If anything more is added, the product jumps over to what TTB views as an entirely different category such as a flavored vodka or vodka specialty.
This approval (issued February 17, 2010) shows Diageo surrendering one of many Rokk labels. This use-up approval (issued September 2, 2010) shows what TTB wants Diageo to change. The most relevant TTB qualifications, toward the center of the approval, say:

(When new labels are printed the class and type designation Raspberry Flavored Vodka must appear conspicuous on the label and the reference to Vodka of Sweden standing alone must be deleted.)
(The reference to Rokk Raspberry Vodka and Rokk Vodka in the text on the back label must be further qualified to include the word Flavored with the designation.)

TTB has been quite concerned about word proximity, especially on spirits labels, in recent months. For example, certain terms must be near “absinthe.” In other instances (under the current interpretation), the type (such as Tequila) must be “separate and apart” from the brand name (such as Jose Cuervo), and all of it must be apart from other data.
TTB apparently explained all this to Diageo’s satisfaction but perhaps TTB should explain this evolving standard to other affected parties before they get surprised by their own rejections and surrenders.