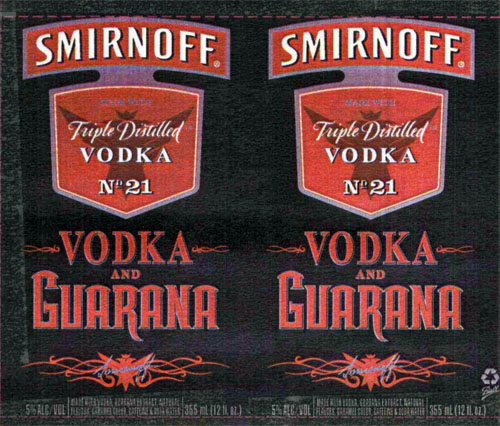 TTB often says the term “vodka” may not appear, in a prominent manner, unless:   the product is simple vodka, or qualifying language surrounds the term, in the same font. An example is VODKA WITH NATURAL FLAVOR, where TTB would not usually allow VODKA to be more prominent than WITH NATURAL FLAVOR.
The product above is not plain vodka, and yet the term “vodka” appears in a surprisingly emphasized manner. It is emphasized by being large (about five times the size of the actual statement of composition). It is emphasized by repetition (no less than six appearances). It is also emphasized to the extent that “Smirnoff” is or was synonymous with “vodka.” The true statement of composition is hard to read on this scan and says:  “MADE WITH VODKA, GUARANA EXTRACT, NATURAL FLAVORS, CARAMEL COLOR, CAFFEINE & SODA WATER.” The other color is off to the side.
TTB has underscored this vodka rule by asserting, on other approvals for this brand:  “When new labels are printed, the word ‘vodka’ cannot appear more prominent nor stand alone. [Vodka & Guarana] must appear together and in the same size type print/font.” TTB felt strongly enough to allow it with all of the following restrictions:  Arizona sales only, test marketing only, 23,000 cases only, and six months only. Curiously, TTB also said “When new labels are printed, all references to ‘soda’ must be removed.” TTB appears to be concerned that an errant minor could mistake the above (or other alcohol beverages bearing the term “soda”) for a soft drink.