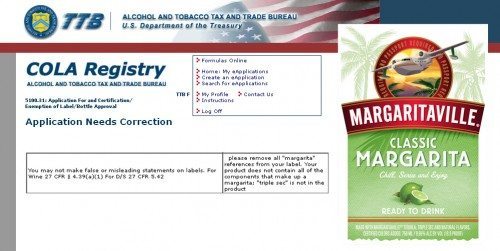 The highly secretive and powerful Triple Sec lobby has struck again — this time to require at least one drop of triple sec in certain alcohol beverages. Google it as much as you wish, and you will find little about this uber-secret institution, rumored to have strong ties leading all the way back to France. That’s because it’s secret. Some even say that Sen. John Kerry, with his thinly disguised sympathies for many things French, is Triple Sec’s man in Washington.
On a more serious note, for many years, TTB has required at least some triple sec in products that purport to be margaritas. The policy is here, at page 13 (scroll down to Margarita). The policy is in TTB’s “Beverage Alcohol Manual” for spirits. The BAM can be a handy resource to explain and supplement the regulations. Sometimes, as here, it goes considerably beyond what the law or regulations say. In this particular case, it seeks to mandate that every margarita must have:  “Tequila, triple sec and lime or lemon juice or oil or natural lime or lemon flavor.” Here is a recent example of TTB seeking to enforce the rule.
Does such a rule make any sense in this day and age of scarce resources? What is the worst that would happen if such a rule went away? Some may say the rule does not go far enough — and should similarly apply to malt beverages, wines, cocktails prepared at retail premises and even homes. If you have any doubt about the hushed-up threat presented by this rule (explaining how to make various cocktails), do not forget that the same rule also requires just a little bit of cream — or crème as some call it — in a Grasshopper or Pink Squirrel.