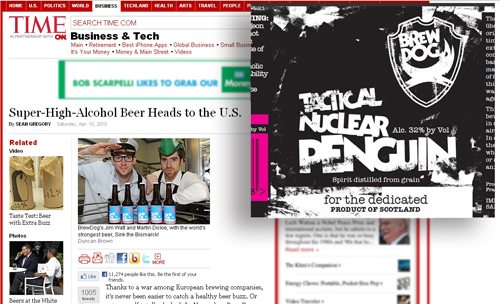 Time Magazine calls the above beer one of the world’s strongest. It looks to be considerably stronger than any beer that the US rules can tolerate. In other countries, Tactical Nuclear Penguin is sold as a beer, at 32% alc./vol.
But this approval shows that, under US rules, this “Super-High-Alcohol-Beer” is actually a distilled spirit (Spirits Distilled from Grain). The Time article explains how BrewDog uses low temperatures to get the alcohol content so high:

the brewery was able to attain the high alcohol content by freezing the beer at a local ice cream factory, at temperatures as low as -6°C (21°F), for 21 days. Alcohol freezes at lower temperatures than water, and removing water from the solution increased the alcohol concentration.

Under US law, such manipulation of the alcohol may be treated as distillation. The Time article points to two even stronger products that at least start as normal beers (before becoming tactical or nuclear):

The drinking games continued in February when a German brewer, Schorschbrau, released a 40% ABV beer called Schorschbock. The BrewDog boys fired back a few weeks later with high-octane concoction Sink the Bismarck!, which checks in at 41%, enough to reclaim the “world’s strongest beer” mantle. …

There is no sign that these other two have been approved for US sale at all yet, let alone as beer.

Filed Under: malt beverage, whiskyTags: hybrid, nutrition, policy, would you approve it?, would you drink it?