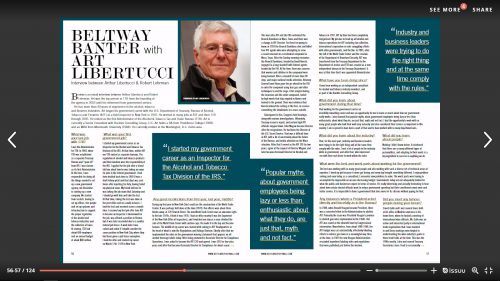 Find out more about how TTB and federal agencies really work, in this discussion with Art Libertucci, from the Summer 2017 issue of Artisan Spirit magazine. Art ran TTB for many years, and had a long career in ATF before that. He has a huge amount of experience when it comes to alcohol beverages, rules, taxes, Washington, and so on.

Here as an excerpt, where Art describes the beginning of this journey.

I started my government career as an Inspector for the Alcohol and Tobacco Tax Division of the IRS. At that time, neither ATF nor TTB existed as separate bureaus. The regulation of alcohol and tobacco products and their taxation were the responsibility of the IRS. I applied for the job after a friend told me about how he was taking an exam for jobs in the federal government. I had been drafted back then in 1969 (I was a draft lottery pick) and that day I was sent home after reporting for duty, having failed my physical exam. My friend told me he was taking the job exam that Saturday and I should go with him and take the test. At that time, taking the test was done at the post office and on a walk in basis. I took the test and received scores a month later. I received my first job offer from ATF, to become an Inspector. I interviewed for the job, was offered a position in Boston, but it was later rescinded due to a sudden federal job freeze. A week later I was called and asked if I would consider the same position in New York City, where they had been given a job freeze exemption. I took the offer and started my career on March 17th, 1970 in New York.

If my math is correct this gives Art 47 years (and counting) of experience, watching the alcohol beverage business from a front row seat.