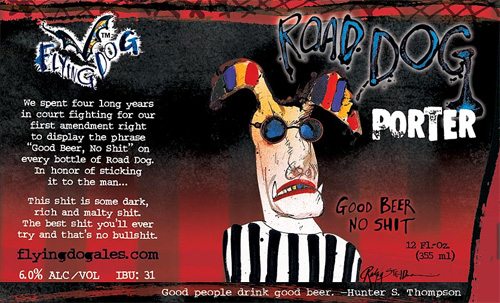 The Road Dog Porter label mentions shit not less than five times. Who would have expected the Founders were fighting for a beer company’s right to say this, and who ever thought a beer company would go so far to claim it. The label says:

We spent four long years in court fighting for our first amendment right to display the phrase “Good Beer, No Shit” on every bottle of Road Dog. In honor of sticking it to the man…

Fermentarium has part of the story:

The real heart of the issue is … You can’t put something indecent on the label.  Unfortunately it is some guy in the government who gets to decide what’s considered obscene.  He might be cool or he might be the most uptight person in the world.  There is no way for the brewer to know.  You might consider something obscene, but others may find the label acceptable.  For example, is profanity considered obscene?
In 2001, the State of Colorado said yes it is.  Flying Dog Brewery’s Road Dog Ale label was rejected because the label said “good beer… no shit”.  The ACLU and Flying Dog Brewery sued stating the State of Colorado violated their First Amendment rights.  Colorado agreed to discontinue the label restrictions, however it is ultimately a state right.  Kansas can have completely different rules and restrictions.