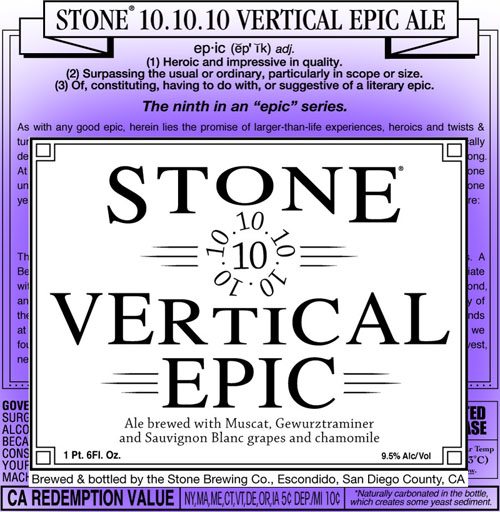 We have not seen wine products with added beer or hops. But here, just in time for epic Ten Ten Ten festivities, is beer with added wine or something very closely akin to it.
Vertical Epic is made by Stone Brewing of Escondido, California. It is classified as Ale Brewed with Muscat, Gewurztraminer and Sauvignon Blanc Grapes and Chamomile. We find it interesting that TTB could have, but apparently chose not to, say something like, please remove the grape names as they tend to misleadingly suggest that this is wine. The back label has some good information, such as pointing out that this is the ninth in a series, beginning with a 2/2/2002 beer and so on, “Each one released one year, one month and one day from the previous year’s edition.” The back label also has a helpful link to “a detailed home-brewing recipe.”
Stone’s blog, with lots of videos, further explains:

Initiated in 2002—when the notion that Stone might still be around in 2012 was more hope than certainty— the Stone Vertical Epic Ale series has given Stone brewers an avenue for creative expression while helping spread the good word about the benefits of cellaring beer.

Stone Head Brewer Mitch Steele, who studied enology at UC Davis and spent 8 years toiling as a vintner in his early days, made the trek up to South Coast to watch the grapes that would become 10.10.10 go from vine to juice.