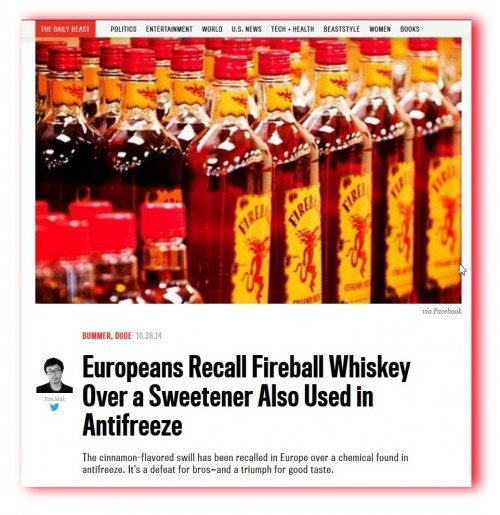 The Daily Beast published a highly relevant story a few days ago, slamming Fireball and propylene glycol. Fireball is a hugely popular “Cinnamon Whisky,” and a recent label approval is here. The story explains that Fireball contains propylene glycol, commonly known as PG, and in the most alarming way that could probably be set forth without a big lawsuit, the article heaps scorn upon PG and Fireball. As of today, Google has more than 81,000 stories about fireball propylene glycol, but the Beast story was one of the first.

One key ingredient of the stuff: Propylene glycol, a synthetic liquid that absorbs water. The Centers for Disease Control note that it is used to ‘make polyester compounds, and as a base for deicing solutions.’ In food production, the CDC adds, the syrupy stuff also can be used to “maintain moisture… It is a solvent for food colors and flavors.”

I called on a few experts in writing this blog post because I think Tim Mak’s article may be unfair to Fireball, its producer (Sazerac) and the important food chemical known as propylene glycol. Kevin at Nutrevolve sums it up pithily: “Anyone who has compared propylene glycol to anti freeze to inspire fear has done nothing but demonstrate a lack of chemistry knowledge. … Notorious for regular application of the Precautionary Principle, even CSPI gives the propylene glycol derivative, propylene glycol alginate a green light – see here.”

I talked it over with Kate Ratliff. Kate is the Technical Director at Flavorman, a leading flavor and beverage company headquartered in Louisville. By the way I think Tim is a great writer, and he picks great topics, such as this gem about beer labels. But the Beast article seems like a prime example of junk science; it is sensationalist and it actually makes readers and consumers dumber. It does no favors for the Beast’s readers, or for anyone who cares about science, or high quality foods. The tenor of the article is inconsistent with the fact that propylene glycol has been widely and safely used in a large percentage of foods and beverages, over more than 50 years, around the world. Many food products would not be as good without this key building block. Even if you are looking at an ingredient list on a food label, and PG is not noted, it may well be in the package and probably is. This is because PG is used in thousands of flavors, and there is no requirement to show a flavor’s ingredients on any food label. Moreover, most alcohol beverage labels do not show any ingredient list at all, and ShipCompliant’s amazing LabelVision system shows not even one label that mentions PG (among over 1.5 million indexed labels, and hundreds of thousands of alcohol beverages that probably contain this substance).*

When I talked it over with Kate, she said “Robert, don’t be silly. Everything has established toxicity levels, even things like water and vitamins. Yet, we are encouraged to drink lots of water and supplement our diets with multivitamins. PG is fine.” I happened to be down the street from Sazerac’s plant yesterday, at Kate’s office, whereupon she offered me a shot of propylene glycol, straight up. With assurances from her colleagues (and FDA) that it’s safe for human consumption, I sipped the PG. It seemed oily and bitter, and wholly without any smell. The bitter aftertaste lingered for a few minutes and later I tasted a small amount of sweetness. I am pleased to report that I woke up just fine this morning without any apparent effects. For the record I note that the city and her plant are full to brimming over with some of the finest beverages in the world, but Kate only offered me the PG and a bottle of water.

We thought it was important to respond to Tim’s article because it seems clear that it is aimed at low-information consumers such as your typical frat boy. The article is replete with references to “Bummer, Dude” and Total Frat Moves, not exactly paragons of nuance or subtlety (and yes, the Food Babe also has it wrong). We think they are likely to take away precisely the wrong message — for example the entirely incorrect idea that PG is worse than too much alcohol, or too much sugar, or too much junk food. Or, the entirely wrong idea that Fireball is somehow worse than any of the next 10 cinnamon whiskeys, which probably contain PG as well. The Beast story also tends to suggest that US regulators such as FDA and TTB are asleep at the switch here, and once again this is highly misleading or wrong.

Flavor expert Vince Ficca explained that it is important to use PG as a solvent where alcohol is not a good choice; for example, to bring down the flashpoint, or for countries (such as Muslim countries) where alcohol is not legal. Vince also pointed out that nobody should confuse PG with its toxic cousin, ethylene glycol. Good old Wikipedia explains:

Propylene glycol … is considerably less toxic than ethylene glycol and may be labeled as “non-toxic antifreeze”. It is used as antifreeze where ethylene glycol would be inappropriate, such as in food-processing systems or in water pipes in homes where incidental ingestion may be possible. As confirmation of its relative non-toxicity, the FDA allows propylene glycol to be added to a large number of processed foods, including ice cream, frozen custard, salad dressings and baked goods.

Fireball does a nice job of injecting some reason into this discussion here:

Fireball does not contain any antifreeze at all and the suggestion is ridiculous. Sadly, this is the media’s way of crafting attention grabbing headlines, but it simply is not true. We would not dream of putting antifreeze in our product. … PG is a clear, colorless liquid with the consistency of syrup. It is practically odorless and tasteless. It is the ideal stabilizer and clarifier for a large variety of flavors that give most of today’s food and beverages their distinctive taste. … Flavor companies use it to carry flavor ingredients through to the final product, to preserve the integrity of the flavor and to ensure it is shelf stable. We understand that very few flavors can be made without it.

Food scientists tell me it would take many ounces of PG at a sitting to induce a harmful effect in an average person. A bottle of Fireball has less than an eyedropper full of PG. Please don’t take any of this as medical advice. But, now that the Ice Bucket Challenge is passe, I want to publicly call out Tim for the PG challenge. He should put up some examples of ill effects from PG, or drink a shot of PG forthwith.

* Stop the press. LabelVision did find one lonely label unabashedly declaring the presence of PG, and it’s here.

Filed Under: alcohol beverages generallyTags: fda, media buzz, policy, would you drink it?