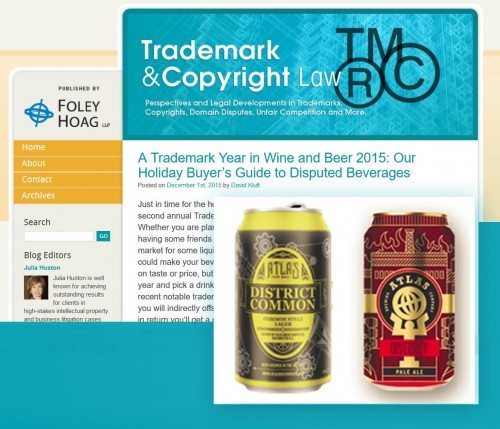 A few months ago, big law firm Foley Hoag compiled a marvelous list of trademark scuffles, within the alcohol beverage category, during the past year. We already knew there were scores of tussles, and the list was growing ever longer, but we never quite realized how fast the casualties are stacking up. The article shows at least 50 such disputes.

Of all those, the Atlas dispute is the one that caught my eye. Because it’s local, must be crushing news for whoever lost, recent, and I had not heard about it but for the Foley article. Foley explained:

The Atlas Brewing Company of Chicago opposed Atlas Brew Works’ application to register ATLAS for beer. The Opposer alleged that “Atlas” was primarily descriptive of a geographic area within Washington D.C., which is where the Applicant is located (“Atlas” is apparently an unofficial nickname of the H Street District). The TTAB rejected this argument, finding that consumers were unlikely to make the connection. The TTAB agreed with the Opposer that there was a likelihood of confusion between the marks, but it found that the Applicant was the senior user (the TTAB did not accept the launch dates of the Opposer’s Twitter and Facebook accounts as establishing priority). The petition was dismissed. Atlas Brewing Company, LLC v. Atlas Brew Works LLC.

Upon reading the opinion, my main takeaway is that the Washington, D.C. brewer tried earnestly and in good faith to find a good brand name, but still had to contend with this expensive dispute. First, they tried VOLSTEAD but House Spirits Distillery shut that down. The Atlas tale and the Foley article further underscore the need to do no less than look around, Google it, conduct a thorough trademark search, engage a specialized lawyer, check TESS, check TTB’s Public COLA Registry, and check LabelVision, when selecting a brand name in a crowded sector. There is not much sign that either party did a particularly good job of scoping out the things that ought to be scoped out, before putting so much sweat and money into a brand, especially since it is getting so clear that disputes are common. In any event, because the Chicago brewer’s opposition was dismissed by the TTAB, it looks like the Washington brewer can shrug this off and move forward with ATLAS as their brand name.