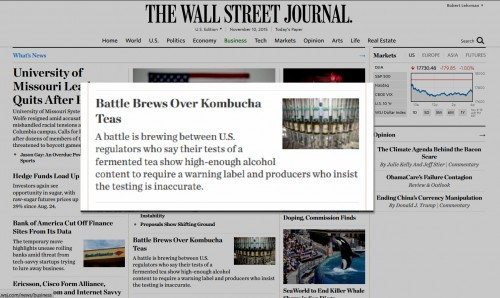 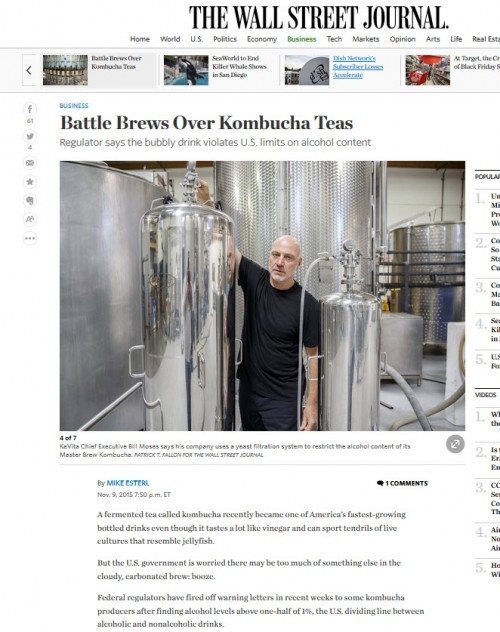 For those without a Wall Street Journal handy, here are some juicy excerpts:

Federal regulators have fired off warning letters in recent weeks to some kombucha producers after finding alcohol levels above one-half of 1%, the U.S. dividing line between alcoholic and nonalcoholic drinks.

Two consumer complaints seeking class action status also were filed last month in California claiming deceptive practices in alcohol-content labeling by industry leader Millennium Products Inc., the maker of GT’s Enlightened and Synergy brands. One of the lawsuits allege alcohol levels of up to 3.8% compared with about 5% in beer.

And for those without Westlaw, here are some juicy excerpts from the Retta complaint:

Millennium Products, Inc. has passed off millions of bottles of its wildly successful kombucha beverages as non-alcoholic, when, in fact, the beverages contain two to seven times the legal limit for non-alcoholic beverages. Having been caught selling alcoholic kombucha beverages to unsuspecting customers in 2006 and 2010, Millennium decided to market and distribute an alcoholic version of its kombucha products (the “Classic” kombucha line) and a “non-alcoholic” version (the “Enlightened” line), knowing that the non-alcoholic line has a much greater market appeal and could be sold in far more retail locations. But the purported distinction between the “Classic” and “Enlightened” lines is a sham designed to confuse the public and government regulators, as both lines of products contain alcohol levels far surpassing the legal limit for non-alcoholic beverages.

Just like Ben Carson who finds himself newly in the spotlight for good (polls) and bad (almost stabbing a person with other than a scalpel), kombucha has so arrived. It faces the glare of TTB, the courts, the plaintiffs bar, AHPA, the press and Rep. Polis.