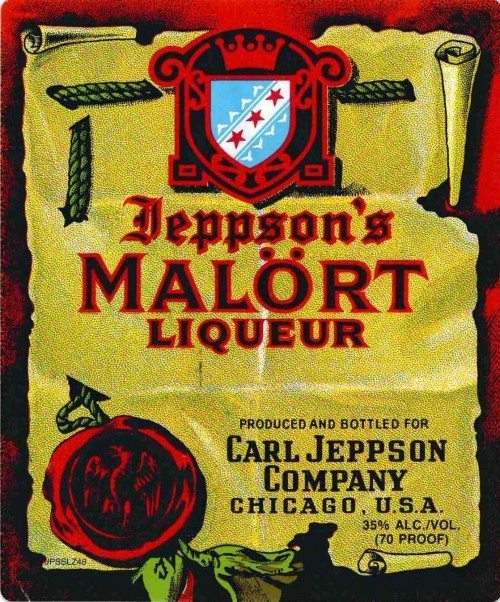 On a long drive recently, NPR held up Malort as the gold standard for what tastes bad, as if this had been firmly decided. So, after hearing about this concoction over the years, it was time to see what all the revulsion was about. The New York Times said “The taste has been compared — by advocates and detractors alike — to rubbing alcohol, bile, gasoline, car wax, tires and paint thinner.” One “Malort face” is here, a collection is here (and NPR’s audio reaction is here).

Malort is Swedish for wormwood, a key ingredient of this liqueur. The same mischievous plant (also known as Artemisia absinthium) also provides a key ingredient and the name for absinthe and vermouth. Recent Jeppson’s labels do not mention the following, but the writing seemed so distinctive that I wanted to capture it before it recedes further into the past:

Most first-time drinkers of Jeppson Malort reject our liquor. Its strong, sharp taste is not for everyone. Our liquor is rugged and unrelenting (even brutal) to the palate. During almost 60 years of American distribution, we found only 1 out of 49 men will drink Jeppson Malort. During the lifetime of our founder, Carl Jeppson was apt to say, “My Malort is produced for that unique group of drinkers who disdain light flavor or neutral spirits.” It is not possible to forget our two-fisted liquor. The taste just lingers and lasts – seemingly forever. The first shot is hard to swallow! PERSERVERE [sic]. Make it past two “shock-glasses” and with the third you could be ours…forever.

I am not sure if it sounds more like a sales pitch or a threat. Other than the Wikipedia article, I could not find much to verify that this text appeared on labels. Apart from the shock value of this product, as per usual, legal issues abound. First, I wonder how this comes to be classified as a beverage (subject to taxing and licensing as an alcohol beverage). If this is not non-beverage or unfit for beverage purposes, it starts to get really difficult to make this distinction (as between potable and non-potable), so crucial to much of the law around alcohol beverages. Malort may underscore that it’s okay for one purveyor to elect to be regulated as a beverage, even when the liquid tastes awful, and even though it would not be okay for another purveyor (of drinks with “rugged and unrelenting” flavors) to capriciously elect to be regulated as non-beverage.

A second law-related issue arises from the ownership of this brand. Carl Jeppson was an immigrant from Sweden and brought Malort to the U.S. during the Prohibition era. Before Jeppson’s death in 1949, he sold the recipe to a Chicago lawyer, and he left the company to his secretary, Patricia Gabelick. As of 2012, Ms. Gabelick was a “69-year-old retired secretary who runs the company out of her condo on Lake Shore Drive” in Chicago. The Wall Street Journal explained:

sales climbed last year by more than 80% from just a few years ago to 23,500 bottles, with annual revenue of more than $170,000. … Ms. Gabelick seems a bit baffled by the interest in Malört, which was a hobby for her boss, George Brode, a Chicago lawyer who left the company and its one product to her when he died in 1999. … “All my life I wish George had made a product I could drink,” she says. … Jeppson’s Malört got its start when Mr. Brode landed one of Chicago’s first liquor licenses after the repeal of Prohibition in 1933. He added Malört to his stable of liquors when approached by Carl Jeppson, who had a recipe for a spirit favored by the city’s Swedish immigrant population. Mr. Brode eventually exited the liquor business for a career as a lawyer, but kept Jeppson’s Malört.

Even if this blog can’t help you with what to drink this holiday season, we wanted to do our part toward informing you what not to drink.

Filed Under: liqueurTags: type, would you drink it?