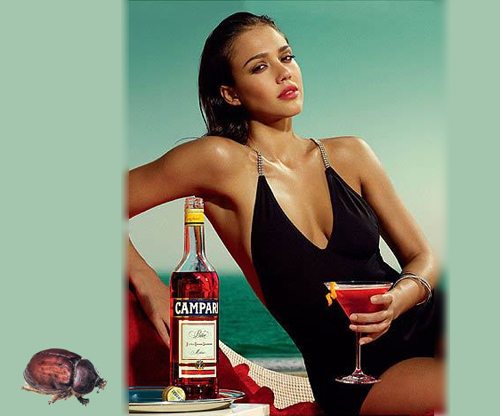 Let’s make it four in a row. Spirits with something close to meat.
First we had worms, scorpions and chicken. We’ll stop before getting to snake. But today is an insect, widely used in spirits. The bug to the left is a cochineal beetle (Dactylopius coccus) and it is widely used in the food industry to make a natural red color called carmine. Wiki says:  “The insect produces carminic acid that deters predation by other insects. Carminic acid can be extracted from the insect’s body and eggs to make carmine dye (also known as cochineal). Carmine is primarily used as a food colouring and for cosmetics.”
We certainly don’t mean to imply that there is anything wrong with this color; it’s been used for centuries and is an alternative to synthetics. This 1999 Campari approval shows the carmine on the back label. This 2007 Smirnoff approval also shows carmine on the back label. FDA has recently called for clear disclosure of this color.

July 9, 2009 Update.  Campari has helpfully explained:  “Campari ceased using carmine in the vast majority of its worldwide production (including the US) in 2006.”