The Trademark Trial and Appeal Board (TTAB) of the United States Patent and Trademark Office (PTO) recently affirmed the refusal to register the mark THCTEA, holding that it is “deceptively misdescriptive” when used in connection with tea-based beverages. The Applicant—Christopher Hinton—is, according to marijuanafreepress.com, the acting editor for the Marijuana Free Press.

THCTEA’s journey through the trademark system has been an uphill battle.The mark was first refused by the PTO back in September 2012, for being “merely descriptive” and for “plainly indicat[ing] that Applicant’s…goods include…THC.” One pre-requisite for trademark registration is lawful use of the mark in commerce. The problem in this case was that goods containing THC (tetrahydrocannabinol, the active ingredient in marijuana) are illegal under federal law, so it would be impossible for the Applicant to show lawful use of the mark if the product did indeed contain THC.

Here is where things become interesting. The Applicant responded by clarifying that his beverages do not actually contain THC. Accordingly, the PTO rescinded its refusal based on unlawful use, but raised a new ground for refusal, based on the Applicant’s own admission: Using THCTEA on a beverage that contains no THC is deceptively misdescriptive.

After the PTO issued a final refusal, the Applicant appealed to the TTAB. On appeal, the Applicant re-alleged his previous arguments: “The characteristics of Applicant’s goods are such that they are suggestive” and “the product does not contain the controlled substance THC…THC is an abbreviation for ‘The Honey Care Tea.’” The TTAB was unpersuaded, and affirmed the PTO’s refusal.

Additionally, the specimen (below) that the Applicant submitted to the PTO probably did not help his “Tea Honey Care” argument: 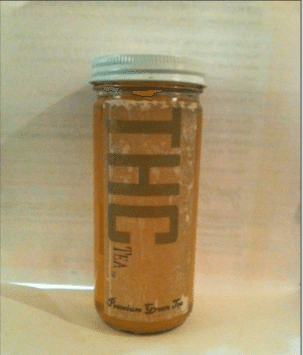