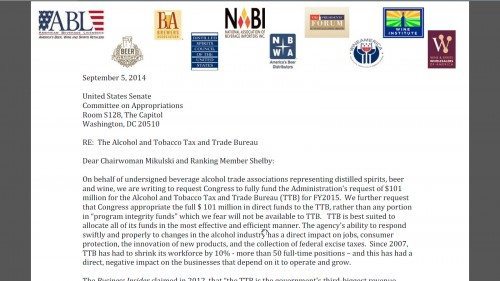 I read about TTB funding a few days ago in Wine & Spirits Daily. It is good but I still don’t understand why they don’t use more links. I had to look elsewhere for the letter, to the Senate, about TTB funding. The letter is here.
Here are some highlights and observations:

From my perspective, it does look plain expensive to run something like TTB. I would imagine that not handling paper and not mailing out tons of labels and formulas has saved TTB a lot of money in the past decade. It would seem that most of the costs for systems like FONL and PONL and COLAs Online are one-time only costs. While those systems seem to work reasonably well, it is very difficult to have a dialogue by phone, in-person, or email, and though this is unfortunate, I suspect it saves a lot of money (at least in the short-term). On the other hand, in TTB’s quest for some internet-based efficiencies, they may have succeeded too much in making it easy to submit all manner of stuff. This forces TTB to deliberate upon every hare-brained scheme with about the same exertion as the next big thing.