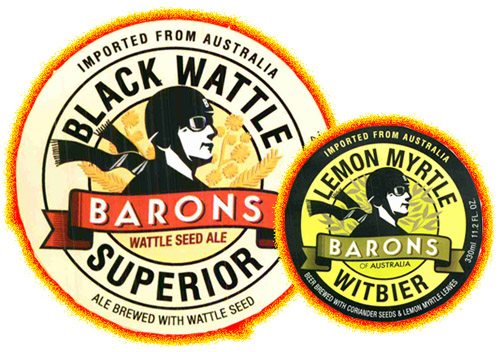 Barons Black Wattle is Australian Ale Brewed with Wattle Seed. The attractive graphics caught my eye at the beer store. And so, like Vic Cherikoff, I wanted to know:  So What The Bloody Hell Is Wattleseed? It turns out that Cherikoff may well be the world’s foremost expert on this seed, and “world trends in Wattleseed use.” He explains:

For over 6000 years, Australian Aborigines in different clans around the country, parched and milled wattle seeds from around 100 of the 900 plus species of Acacia, then used the coarse flour in baked seed cakes. … Wattleseed is a great inclusion in anyone’s diet. It has an unusually low glycaemic index which means that the carbohydrates in it are slowly absorbed and therefore better for you than sugary, quick release alternatives.

Wikipedia explains that “Wattleseed is a term used to describe the edible seeds from around 120 species of Australian Acacia that were traditionally used as food by Australian Aborigines and they were eaten either green (and cooked) or dried (and milled to a flour) to make a type of bush bread.”
The same brewer uses another little-known ingredient in its Witbier. Barons adds lemon myrtle leaves along with the more common coriander seeds. Lemon myrtle is:

a flowering plant native to the subtropical rainforests of Queensland, Australia. … [It is] considered to have a “cleaner and sweeter” aroma than comparable sources of citral [such as lemongrass]. … Lemon myrtle is one of the well known bushfood flavours and is sometimes referred to as the “Queen of the lemon herbs”, with the new growth preferred for its sweetness.