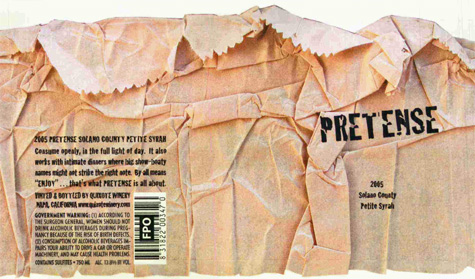 Most wines play up their fine pedigree. A few cut in the other direction and proclaim their normality. Pretense wine, bottled in Napa, does the latter with dramatic visual flair. The common paper bag looks surprisingly good and fresh here. Pas Mal Syrah is another example of this trend. It is a Santa Barbara County Syrah and “Pas Mal” is French for “not bad.” The back label unabashedly says “French critics agree, Pas Mal is not bad. ‘I would cook with this.'” Let us know of other unabashedly self-deprecating alcohol beverages.

Filed Under: wineTags: business strategy, design, would you drink it?, writing/witty/funny