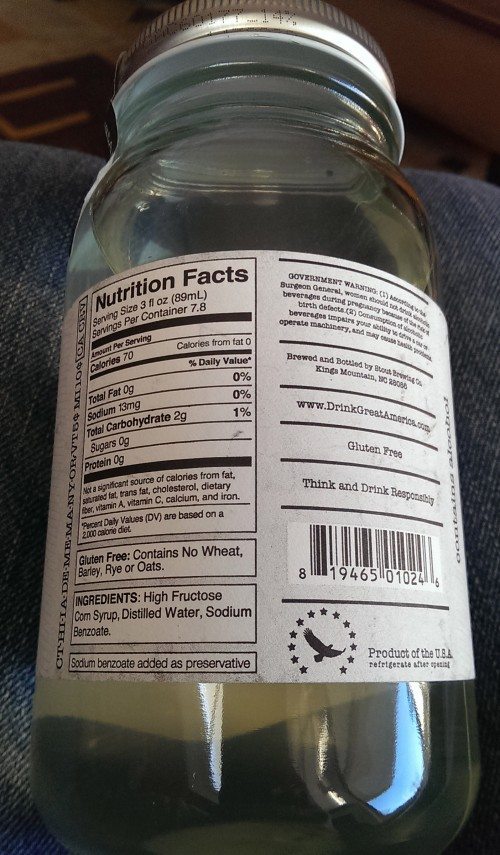 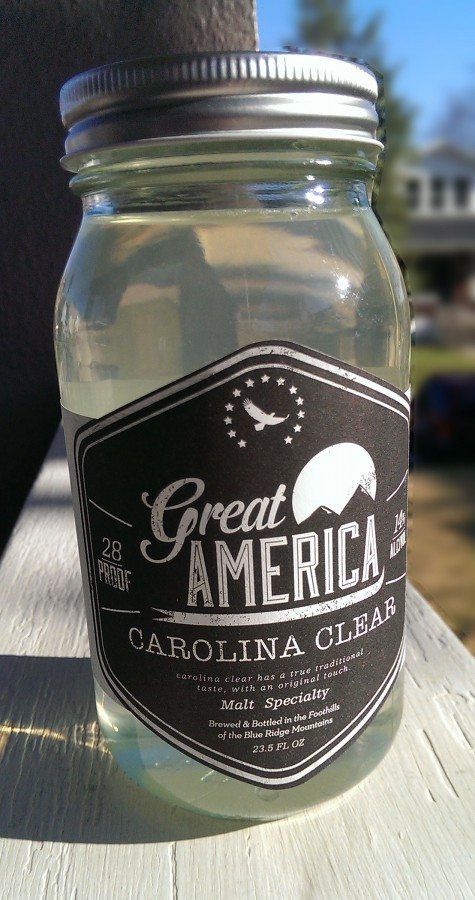 I stumbled on Great America “Carolina Clear” at a gas station in Bardstown, Kentucky, of all places. It was just a couple miles from Jim Beam and Four Roses. I would have assumed the heart of Bourbon Country is roughly the last place for a product such as this to thrive. And yet, the guy loitering and smoking out front advised it is an excellent product and will get one messed up almost as good as the illegal stuff. The display had about 40 jars of the product, in various flavors, a couple days ago. When I went back today, only one jar was left.

And so, if it’s not beer, wine or spirits — what could it possibly be? It took me a few minutes, and a return trip, to sort it out, because this is indeed an unusual product.

The front label describes it as Carolina Clear, Malt Specialty. There is no mention of beer, and there is no TTB label approval, because the product apparently lacks the hops and malted barley required to fit within the U.S. definition of a “malt beverage.”

The back label explains, in the FDA-style ingredient list, that the product only has three ingredients. I don’t think anyone will be surprised, at least at this point, that those ingredients are not the ones elevated in the Reinheitsgebot (the German Beer Purity Law of 1487, allowing beer to be made with water, barley and hops only). The North Carolina-made “malt speci

alty,” selling for $5.99 a jar, is made only with high fructose corn syrup, distilled water, and sodium benzoate. It is tough to imagine an alcohol beverage that could be produced at lower cost.

Notwithstanding these distinctions, the federal taxes and permit requirements would be the same for this product as compared to typical beer.

This product is put out by Stout Brewing Company and also comes in common moonshine flavors such as peach, apple pie, and strawberry. Stout also markets similar products in 3 ounce tubes (as in the image immediately above).

Filed Under: alcohol beverages generallyTags: fda, hybrid, policy, would you drink it?