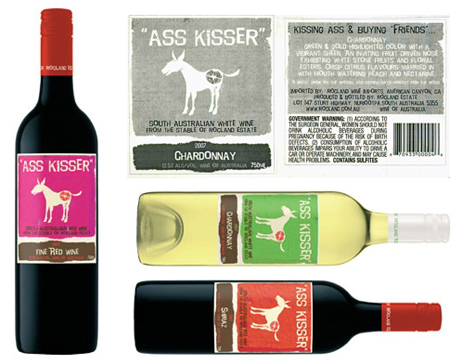 Thanks to Barry Strike for bringing this label and controversy to our attention. Barry is a lawyer at Hinman & Carmichael in San Francisco, where he has practiced wine and beverage law for many years. Barry explained:

In mid-2008, TTB approved four wine labels with the brand name above. The wines are made in Australia and imported by Rocland Wine Imports, of California. Either TTB is developing a sense of humor or the examiner is an ardent animal lover. (Or perhaps the examiner thought this was an animal husbandry reference?) In any case, this is a good example of TTB’s approval of a label with a brand name that likely would have been regarded as profane a few years ago. Notwithstanding TTB’s apparent embrace of humorous, daring labels, some state regulators are not as enlightened. The state of Michigan recently refused to allow Big Ass brand wine to be sold in the state. Lacking any applicable regulatory or statutory basis for disapproving the label, the state claimed it was racist(?!). The Big-Ass Coalition must have applauded the state’s bold step to protect big asses everywhere.

Filed Under: wineTags: legally interesting/controversial, policy, risqué, would you approve it?