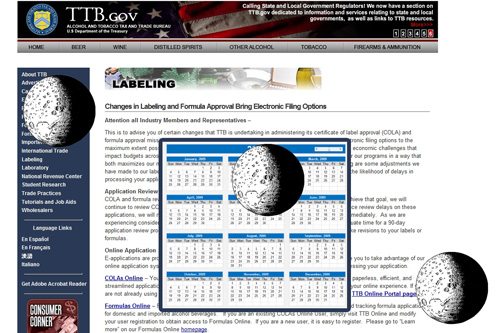 In recent weeks, TTB has implemented sweeping changes, with little attention from the media. Some of the changes are for the better, but many will make it substantially harder for beverage producers and importers to get things done. These changes will affect companies and products as profoundly as any other changes at this agency over the past few decades, no less than other big changes such as tax rates, the shift from ATF to TTB, the Part 13 revocation rules, the demise of caffeine alcohol beverages, or new Administrators. It is difficult to think of any law change or policy change with as much day-to-day impact on the regulated parties, and much of this was done with no opportunity for meaningful industry input.

It is possible that I am being too cynical, and these various changes will allow TTB to get away from distractions and focus on cranking through swarms of electronic submissions. If I am being too negative, nobody will be more delighted than I, if TTB proves me wrong, or shows that these things are actually big improvements. It would also be helpful to hear from the old timers, who have been getting things done at TTB since well before I started in 1988. For example, maybe Tom, Ann, Deb, Vicky, or Fred will chime in about the good(?) old days. Way back in the late 1980s and early 1990s, well before all these amazing gadgets and Oklahoma City, it is bittersweet to recall a seemingly bygone era. When you could wander the halls of the ATF building without an escort. When you could show up in the afternoon with a stack of paper labels, wait your turn with only a few people ahead of you, sit down with the decision maker, and walk out an hour later with a stack of label approvals. When you could talk it over with the regulator, change a few rejections into a few approvals with an argument, a prior approval, a few strokes of a pen, a use-up, or a warning.
These changes will hit hard on small companies and big companies. They will also have a big impact on Washington-based lawyers and consultants, but at least the lawyers and consultants have plenty of tools, and they aren’t busy trying to make wine. It could be worse. It’s possible. TTB could cut the hours another 75%, to 15 minutes a day, or change the 90 days to 180. Right about now, however, it would be nice to see some trends in the other direction.