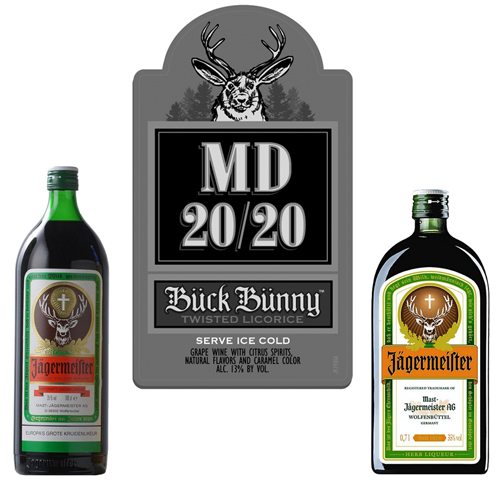 The Buck Bunny didn’t get very far. It stopped not far from this 2006 approval. Maybe the antlers, or the spirits, or Jägermeister got in the way.
A contributor in California was concerned about the spirits added to this product, and the overall appearance. He said:

It seems legally interesting because it seems to contradict the TTB labeling code about wines containing distilled spirits and being similar to distilled spirits. Maybe those rules don’t apply to flavored wines. Also, it reminds me of a Jackelope.

Quite possibly, it also reminded Peach Street Distillers of a Jackelope. Peach Street rolled out their Jackelope Gin about a year later.
The spirits are probably a minor problem, compared to the other issues noted above. It is common to add spirits to wine. It is less common to mention them, but it is usually required, when those spirits are not derived from the same fruit as the base wine. Here it is grape wine with citrus spirits. If it were grape wine with grape brandy, the spirits would be less likely to show on the label.