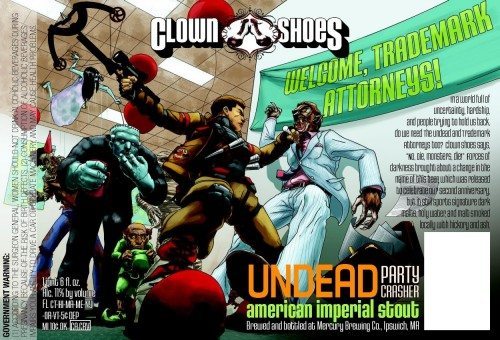 I am thinking this may be the best label ever, about lawyers. If I am not mistaken, that is a garden-variety lawyer, right below “Welcome, Trademark Attorneys!” and right above the briefcase. The lawyer just happens to be wearing a pink shirt, white suit, and closely resembles a werewolf.

It all started when Clown Shoes beer company got label approval for a Vampire Slayer beer in 2011. It is important to note that this beer claims to be made with “holy water” and “vampire killing stakes.”

Vampire Brands and TI Beverage Group, connected companies out of California that primarily market vampire themed wine, were suing us. They came to market six months after Vampire Slayer began distribution with a beer made in Belgium called Vampire Pale Ale, but they filed a trademark application prior to our distribution. Their position was that our use of the name Vampire Slayer was harming their ability to sell Vampire Pale Ale, literally costing them money.

Clown Shoes was not amused, and expressed its dismay on the label above. In addition to the not-so-flattering imagery, the label also says:  “Do we need the undead and trademark attorneys too? Clown Shoes says ‘No, Die Monsters, Die!’ Forces of darkness brought about a change in the name of this beer. …” Clown Shoes caved in because:

we felt that we stood an excellent chance of winning a court battle. Then we found out that litigation could cost between $300,000 to $400,000. … Ummmm… that sounds like stabbing ourselves in the face to cure foot pain. … A settlement, the terms of which I am not at liberty to disclose, was reached with [Vampire Brands] that licenses Clown Shoes to use the name Vampire Slayer. I can say that based on all factors, the Vampire Slayer name will soon be discontinued, despite the licensing agreement.

All of this just goes to show that nobody should mess with vampires, going into a trademark dispute without some protection, or the attorney at Vampire Brands. A good article about the dispute is here. Volokh has some other law-related labels here. And a good, recent, other lawyer-related label is right here.