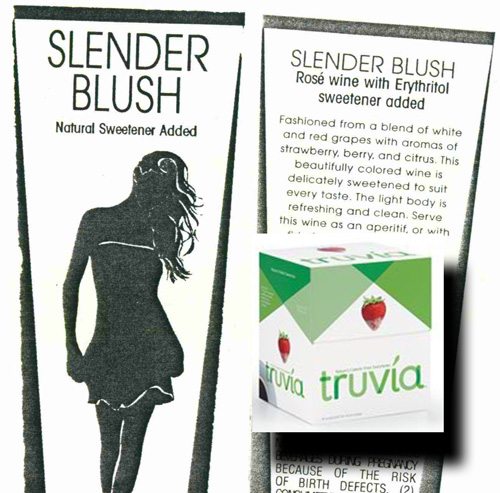 FDA said Truvia looks okay on December 17, 2008 and TTB approved this wine, with erythritol, a mere two days later. It is difficult to distinguish among erythritol, stevia, Truvia, rebiana and many other new sweeteners hitting the market. Erythritol seems to be a component of Truvia. Fooducate says erythritol is:

a sugar alcohol, a carbohydrate found naturally in various fruits and vegetables. Used in both Purevia and Truvia. It helps them mimic the texture and mouthfeel of table sugar.

the trade name for a stevia-derived sweetener developed jointly by the Coca Cola Company and Cargill. According to Cargill, rebiana is “the best tasting part of the stevia leaf.”

a South American Plant from the sunflower family, grown and used by locals for its sweet tasting leaves. Stevia Extracts are 200-300 times sweeter than sugar, but contain no carbohydrates (calories).

Cargill, finally, on its Truvia FAQ explains that erythritol “is a sugar alcohol, a carbohydrate found naturally in several fruits. Erythritol doesn’t lead to tooth decay, is safe for people with diabetes and in reasonable amounts does not lead to gastrointestinal side effects (in other words, no gas or bloating).”