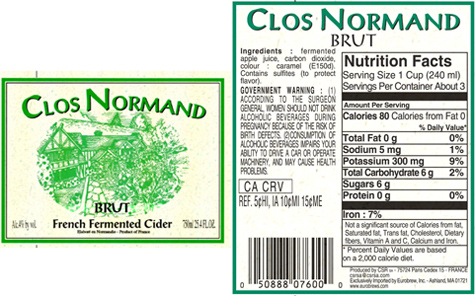 This French Apple Cider provides a small taste of what is coming soon. It is our understanding that TTB has no plans to require or encourage ingredient labeling, such as that on the back label here. But TTB does have big plans to require Serving Facts Labeling (similar to this Nutrition Facts labeling) someday very soon. It’s a big, important change. There is a lot of data on this back label; much of it will be required in a few years and almost none of it would have been required 20 years ago. The Government Warning arrived 20 years ago and redemption labeling (as well as the UPC) started appearing a few decades ago. This COLA is unusual because FDA (not TTB) typically has authority over wines under 7% alc./vol. (such as this cider). But here the importer noted (at box 19) “submitting for review of health warning.” TTB retains control over the Warning and the wine tax, even in those instances where general labeling jurisdiction shifts over to FDA. Some time after approval, TTB apparently decided to hand this back to FDA, as the current status of this approval is “surrendered.”