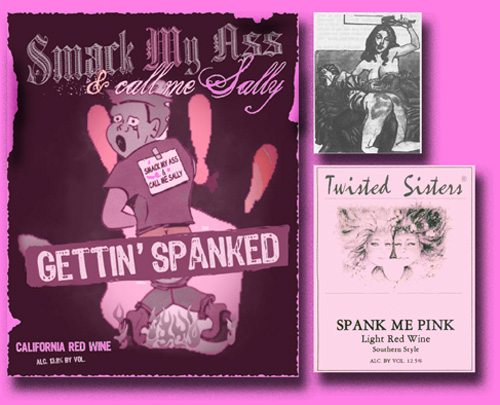 Did you ever wonder what Spanky (aka George McFarland) would drink? Neither did we, until we saw this rash of wines devoted to and inspired by spanking. It’s tough to beat Smack My Ass & call me Sally. It is red wine bottled by Clos La Chance of San Martin, California. The whole world wide web is insufficient to the task of explaining this term’s origin; the trail stops here. (Speaking of which, the small image at upper right is courtesy of All Things Spanking, and nobody should be surprised there is a site devoted entirely to “eclectic adult spanking.”) Spank Me Pink is red wine with no appellation, produced by Lac Belle Amie of Elizabethtown, North Carolina. The Sisters patiently explain “when she’s good she’s bad, and when she’s bad she’s even better.” Refusing to be left out of the action, Tyranena Brewing slaps a Spank Me Baby! sticker on its barleywine ale labels. In a stunning coincidence, we learn that long after Our Gang wrapped up in the 1940s, Spanky spent his later years selling — wine.

Of GCGs and Rejewvenators
by Robert C. Lehrman on May 4, 2009 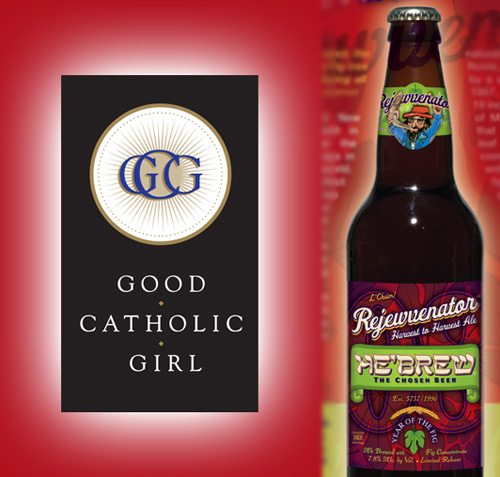 I am not so sure these two go together — but what the hell. Good Catholic Girl wine is Shiraz from Australia. It’s imported by (I should have guessed it) The Grateful Palate of Oxnard, California. It’s a tribute to the winemaker’s grandmother “who was the quintessential GCG.” About as far as possible from an Australian wine is He’Brew Rejewvenator Ale, made in Saratoga Springs, New York. The Man Room seems to have a copy of the announcement for this beer:

Rejewvenator ferments nearly 500 gallons of Fig juice into a half doppleboch, half Belgian inspired dubbel hybrid lager/ale. … With projected 2008 annual sales at over $1.5 million, Shmaltz Brewing is no longer a one-man operation of sole proprietor Jeremy Cowan. Matching his 550% sales increase with 500% growth of his staff, Shmaltz Brewing now operates with five full-time employees.

They sound good. Together? 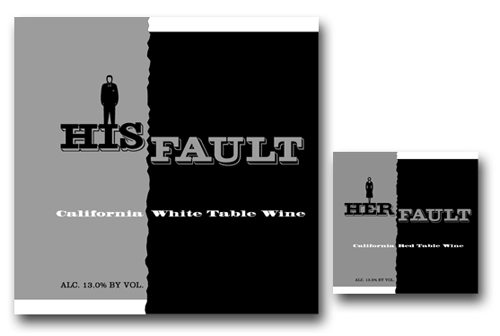 We thought this was a little different, and amusing. His Fault white wine (above), says, on the back:

Did the earth move for you? It’s his fault. … Craving a lush, juicy white blend, with a knockout structure and frisky finish? Now that’s really His Fault.

Her Fault red wine, on the back, says:

Did the earth move for you? It’s her fault. … Craving a sumptuous, deeply flavored blend, with a supple mouthfeel and a really long finish? Now that’s really Her Fault.

The wines are bottled by Adler Fels Winery of Santa Rosa, California. 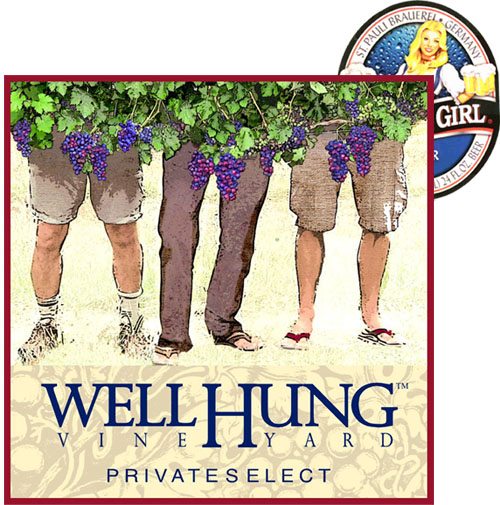 Plenty of labels call attention to feminine endowments, but we haven’t seen too many labels that point so directly to male equipment. Well Hung wine is produced and bottled by Virginia Wineworks of Charlottesville, Virginia. The back label brags that “Our wines stand up to any occasion!” Any other good examples out there? 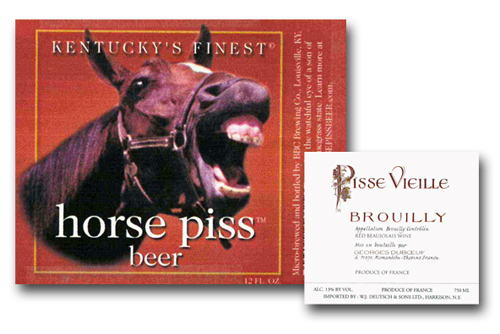 Tags: business strategy, risqué, would you approve it?, would you drink it?, writing/witty/funny 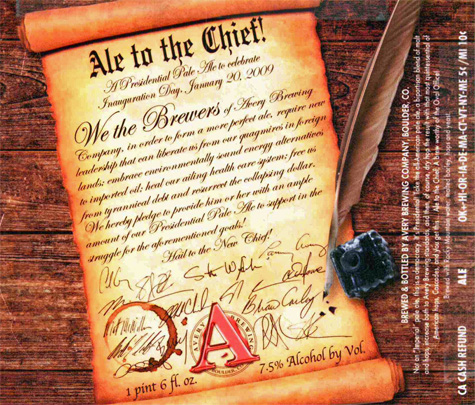 Avery Brewing is more than ready for the new president. Way back in March, this Boulder, Colorado brewer got approval for Ale to the Chief!, a Presidential Ale. Blast Magazine says it’s selling well, and in 32 states. The script on the label says:

Ale to the Chief! A Presidential Pale Ale to celebrate Inauguration Day, January 20, 2009 We the Brewers of Avery Brewing Company, in order to form a more perfect ale, require new leadership that can liberate us from our quagmires in foreign lands; embrace environmentally sound energy alternatives to imported oil; heal our ailing health care system; free us from tyrannical debt and resurrect the collapsing dollar. We hereby pledge to provide him or her with an ample amount of our Presidential Pale Ale to support in the struggle for the aforementioned goals! Hail to the New Chief! A brew worthy of the Oval Office!