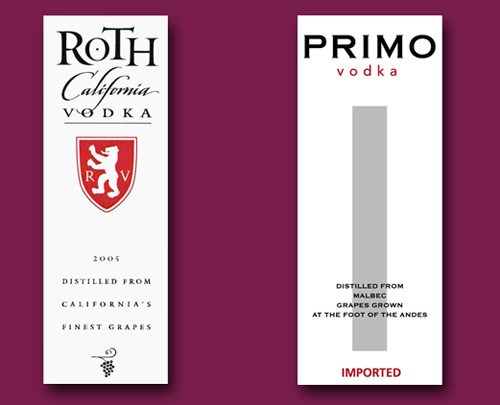 TTB does not usually allow vintage-, varietal- or appellation-type claims on distilled spirits labels. The rationale is that these concepts tend to be more appropriate for wine. But here are a couple of notable exceptions. Roth Vodka displays “California” in much the manner of an appellation. This vodka also happens to be distilled from grapes, and has something close to a vintage date on the front label. The latter apparently went too far, and TTB directed Roth to remove the date.
In some ways, the Primo Vodka label goes a bit further. It mentions a specific grape type, along with the source of those grapes. One side tends to argue that these claims are truthful and verifiable. TTB tends to argue that characteristics such as vintage, varietal and appellation are subtle to begin with; distillation (let alone distillation to the point of neutrality) tends to obliterate such characteristics; and it’s misleading to suggest otherwise. Do consumers need this protection?