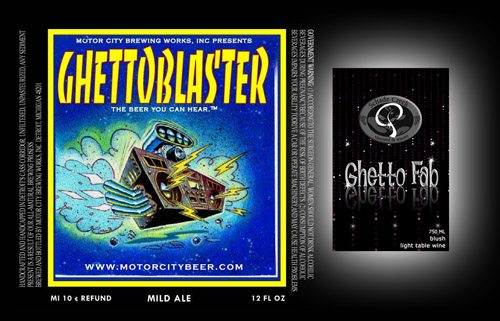 Does the government check for political correctness when reviewing beer labels? Should they?
Here is Ghettoblaster beer. Is it politically correct? Does it or should it offend anyone? Is it any worse than Ghetto Fabulous wine?
One option is to get into a snit and lay on the outrage. Another option is to learn from it. Does “ghetto” really deride or refer to one race only? Maybe, but not the one you may think of first. Here is the origin:

1610s, “part of a city to which Jews were restricted,” especially in Italy, from It. ghetto “part of a city to which Jews are restricted,” various theories of its origin include: Yiddish get “deed of separation;” …  or It. borghetto “small section of a town” (dim. of borgo, of Germanic origin, see borough). Extended by 1899 to crowded urban quarters of other minority groups (especially blacks in U.S. cities). As an adjective by 1903 (modern slang usage from 1999). Ghetto-blaster “large, portable stereo” is from 1982.