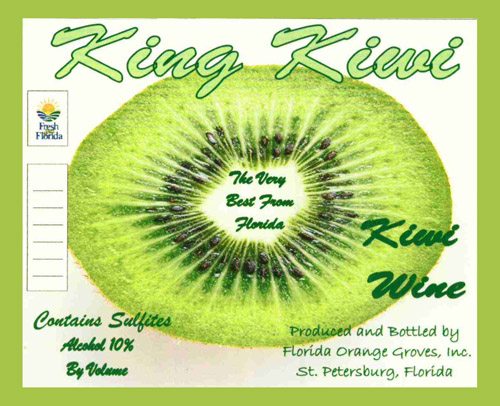 So far, I see 78 references to wine here, but only three references to fruit wine. So today, I endeavor to correct that imbalance.
The imbalance is not due to any shortage of wines made from other than grapes. There are plenty. Today I will show a couple of wines made from the kiwi fruit. Above is King Kiwi, Kiwi Wine, made in Florida. A second producer of kiwi wines is Shalom Orchard, in Franklin, Maine.
Wiki explains that kiwi has also been know as chinese gooseberry, macaque peach, macaque pear, kiwifruit and melonette over the past century. In the 1950s, big growers pushed the name toward kiwi and away from chinese gooseberry. The latter raised issues during the Cold War. And:

An American importer … complained that melonettes was as bad as Chinese gooseberry because melons and berries were both subject to high import tarriffs, and instead asked for a short Maori name that quickly connoted New Zealand.