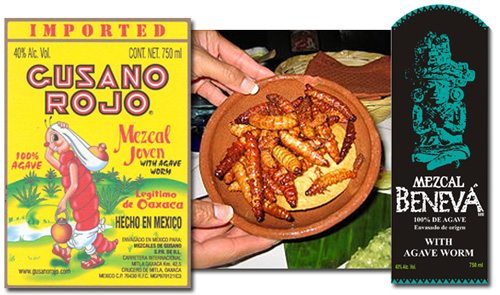 Most people expect fruit and vegetable matter in their spirits. Less commonly, they expect — meat. And yet it’s not so very rare.
The most obvious “meat,” in common use, is the lowly worm that’s been sitting at the bottom of your Mezcal bottle for many years. Gusano Rojo Mezcal is a good example, because the label has a nice little picture of the worm. Mezcal Beneva is a second example.
The Beverage Tasting Institute explains:

The famous “worm” that is found in some bottles of Mezcal (con gusano — “with worm”) is actually the larva of one of two moths that live on the agave plant. The reason for adding the worm to the bottle of Mezcal is obscure. But one story, that at least has the appeal of logic to back it up, is that the worm serves as proof of high proof, which is to say that if the worm remains intact in the bottle, the percentage of alcohol in the spirit is high enough to preserve the pickled worm. Consuming the worm, which can be done without harm, has served as a rite of passage for generations of fraternity boys.

We’ll deliver more meat in a day or two.