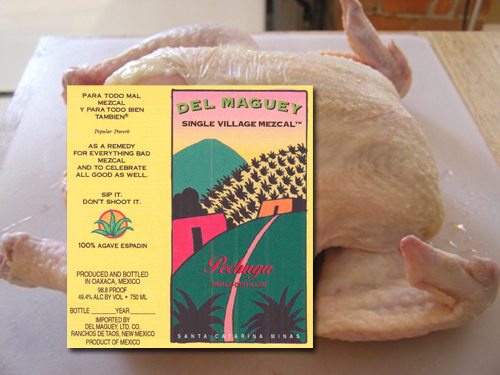 OK we admit that the aforementioned spirits with worms and scorpions are a little light on meat. But here is the real thing.  Spirits with chicken. Chicken.
It is commonly known as Pechuga. Del Maguey is a famous brand. The producer warns about plenty of fake mezcal and pechuga and explains:

Pechuga is begun with Minero; mezcal that has already been double distilled. In preparation for a third distillation [the producer adds] wild mountain apples and plums, big red plantain bananas, pineapples, a handful of almonds and a few pounds of uncooked white rice.
Next, a whole chicken breast, skin removed, bone structure complete, is washed in running water for about three hours to remove any grease. This is then suspended by strings in the atmosphere of the still and a 24 hour, third distillation is begun. The vapor passes over the pechuga and condenses into a crystal clear liquid that has an amazing taste and smoothness.
The reason for the breast they say, is so the mezcal is not dominated by the fruit…a balance.
Upon completion the Pechuga is removed from the still and hung in the family Altar room…the most important space in the house.