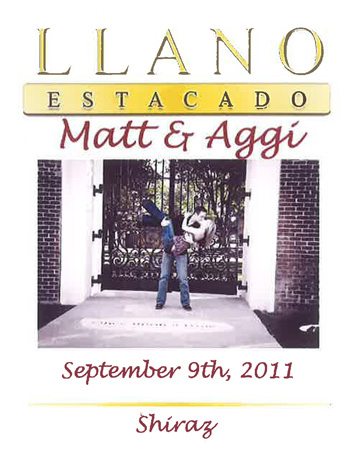 TTB has recently liberalized the treatment of personalized labels, such as a wine label with “Happy Birthday Bob.” No longer will it be necessary to burden your company, or the government, with paperwork to cover “Happy Birthday Steve” or Judy, Tom, etc.
TTB announced this change on September 21, 2011 in TTB Guidance 2011-5. The document supersedes a policy from about a year and a half earlier; the 2010 policy required a new approval for just about every variation (such as each wedding, retirement, Bar Mitzvah, graduation, anniversary, etc.). In liberalizing the policy, TTB said:

The above label, from Llano Estacado Winery, is an early approval under the new policy. The new policy seems due at least in part to pressure from Sen. Schumer. He mounted a vigorous campaign, on this topic, over the past summer. His August 9, 2011 press release, noting the progress, said:

In the case of … personalized labels the TTB agreed with Schumer’s request to streamline the process saying, “Effective immediately, TTB will not require resubmission of labels due to changes in graphics or artwork.”  In the past, TTB permitted wineries to simply apply once for approval of a custom label template to ensure it contained the required regulatory and safety warnings, after which the winery could customize and personalize the artwork … to suit the specific event.  TTB then changed course to require individual approval of labels when changes were made to graphics and label components apart of the regulatory and safety warnings.  By working with industry stakeholders to find ways to streamline approval of these custom labels TTB could, in turn, help ease the current backlog of COLA applications.

New York wineries have recently reported that it can take at least one month to receive approval of an electronically-filed COLA application and two to three months for a paper application. Often, when wineries finally do receive feedback, it is with a rejected label and the necessary corrections, and at that point labels must be resubmitted and the COLA process must begin again. The TTB told Schumer itself that they have noticed a significant increase in the typical amount of time it takes for them to respond to requests for label approvals.

So far, it does not seem that the current personalization policy would extend all the way to other masses of labels, such as Molson and Twisted Tea (large numbers of labels with other sorts of small variations).