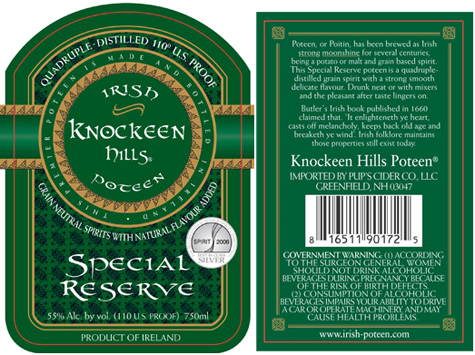 Poteen has been around so long it was banned in 1661. But still, it has not been around long enough to have its own class/type. TTB has hundreds of categories (including the obscure such as diluted rum and dried brandy) but classified Knockeen Hills with “other specialties & proprietaries” rather than in its own category. Poteen is also known as Potcheen and is traditionally made in Ireland, at a high alcohol content. The name is short for the pot (“pota” in Irish) in which it is distilled. Poteen is usually made from barley or potatoes and this one is Grain Neutral Spirits with Natural Flavors, at 110 proof. The Irish Government has frowned on Poteen for many centuries (branding it as “moonshine,” as described on the back label here). But Ireland began allowing Poteen exports in 1989, domestic sale in 1997, and sought appellation status for Poteen in 2008. The back label says:

Poteen … has been brewed as Irish strong moonshine for several centuries … Butler’s Irish book published in 1660 claimed that “It enlighteneth ye heart, casts off melancholy, keeps back old age and breaketh ye wind.”