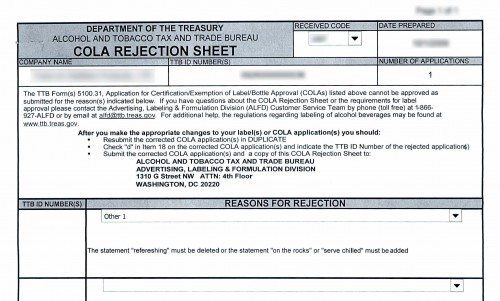 Quite a few readers have said, “yeah, unusual approvals are great, but what about rejections?” Here we have the first post of many, from time to time, showing common or revealing label rejections.
First, some ground rules. We will not show the brand or company at issue. TTB tends to treat label rejections as confidential and approvals as public, and we’ll mirror this sensible policy. To this end, we may blur out some identifying information where necessary, such as above. In rare cases, we’ll change a little bit of text (in the example above we changed about three letters to avoid the distraction that might otherwise be caused by typos; we did not change the substance). If you have a good and interesting rejection, please let us know and we’ll make sure to treat it in line with the policy above.
On to the controversial term at hand. For many decades, TTB has been concerned about the term “refreshing,” so common on all manner of beverages. TTB’s concern seems to be that it’s awfully close to a therapeutic claim, suggesting an effect on your body. “Invigorating” or “stimulating” would go a bit further and probably raise the same issues. Rather than ban the term “refreshing” outright — which would seem a bit out of proportion to the harm it could cause — TTB frequently says it must be accompanied, in close proximity, by something like “serve chilled.” The above rejection is such an example. It says “The statement ‘refreshing’ must be deleted or the statement ‘on the rocks’ or ‘serve chilled’ must be added.” This would tend to make it clearer that any effect on your body is rather innocent and fleeting. It’s not going to cure your eczema or chronic exhaustion.
This Franzia label pretty much shows how TTB wants the term used. “Refreshing” is fairly prominent on this label, but “Serve Chilled” is not too far behind.
By contrast, here are a few that seem to go in the opposite direction. Erik’s Refreshing Riesling does not seem to have much chill talk. Nor does this MillerCoors Honey Moon label (“A Refreshing Summer Ale with Honey & Orange Peel”).
We feel it’s important to set some of these policies out, because a lot of them do not appear in the regulations or BAM. As a result, they are inherently subject to confusion and surprise.