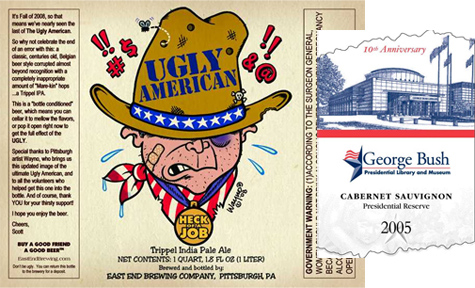 Despite many problems here in the US, the beer on the left shows the First Amendment is alive and well. Does anyone else find it a remarkable testament to the country’s strength, that the executive branch would affirmatively approve a label rather bashing the sitting president? This label does not pull any punches, with a reference to Brown and the Katrina fiasco. It goes on to say “It’s Fall of 2008, so that means we’ve nearly seen the last of the Ugly American.” TTB has approved only a small number of labels referring to presidents. For those disinclined to find fault with President 43 we’d recommend the Cabernet Sauvignon.