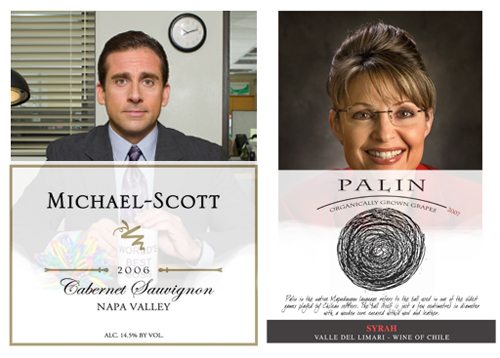 Michael-Scott wines (above) have been around since 1998. Then, from out of nowhere, everything changed in March of 2005. That’s when The Office debuted on NBC, with Steve Carell in the lead role as the hapless Michael Scott. There is no word on whether this hit show has been good or bad for the winery, in Sebastopol, California.
In a similar manner, it looks like Montecastelli Wine, Inc. started using the Palin brand name in 2008. Seven months later, the brand took on a whole other personality when Sen. John McCain selected Gov. Sarah Palin to be his running mate. It was not necessarily the good kind of publicity. Serious Eats reports:

“It was our best selling wine before (the V.P. announcement),” said Chris Tavelli, owner of Yield Wine Bar, which has offered Palin Syrah, a certified organic wine from Chile, by the glass since July. But after Sen. John McCain tagged Sarah Palin as his running mate, sales of the wine with the conservative’s inverted name plummeted — not surprising in famously liberal San Francisco.

The Palin Syrah is organically grown in Chile.