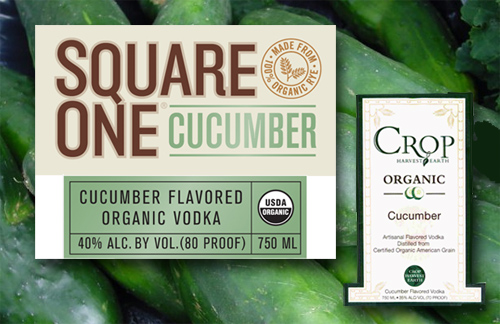 All of a sudden there are at least four cucumber flavored vodkas. All seem to be first approved during 2008.
Why all of a sudden? Is cucumber especially refreshing or versatile? If so, why didn’t somebody do this decades ago, inasmuch as the venerable cuke has been around for quite some time? Maybe it’s an advance in flavor technology, finding a way to capture what would appear to be a rather delicate flavor. In an attempt to understand the rise of cucumber flavored vodka, we looked to Morgenthaler and The Intoxicologist and Alcademics but still we don’t understand why cucumber and why now. If we had to guess, we’d say it’s a tribute to Hendrick’s gin. It came out in 1999 and refers to an “‘unexpected’ infusion of cucumber and rose petals” on the back label. The producer’s chief chemist explains:

we didn’t know exactly how to introduce the cucumber into the blend. No one had ever put cucumbers in gin. We did a lot of experiments macerating and steam-distilling cucumbers before we came up with the right formula. And it was the same with the rose petals. … Hendrick’s is made in small batches using a 550-liter pot still from the 1880s. The cucumber and roses are added at the very end so that their flavors and aromas don’t disappear.

Square One (above) is made in Idaho from rye by master distiller Bill Scott. Crop is made in Minnesota from grain more generally. Two others are Rain and Pearl.