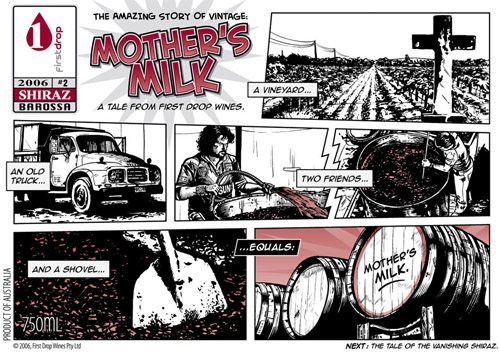 In many areas, TTB is fairly literal-minded. For example, if you are bound and determined to mention energy on your label, you are unlikely to get very far, without much regard to context, as in this example. Likewise, good luck if you want to use the term “organic” on anything not in line with the organic rules.
In other areas, though, TTB will view a term much less literally. Mother’s Milk Shiraz is one such example. As best I can tell, it contains no milk. There is a recognition that the term is not to be taken seriously, even though it is quite possible to make a wide variety of alcohol beverages with and from real milk. This vodka distilled from milk is but one example.
If you gave up Mother’s Milk before third grade, you may prefer Dragon’s Milk. Another alternative is Devil’s Milk. Even without ingredient labeling I am reasonably sure that the Devil contributed no milk whatsoever to DuClaw’s ale.