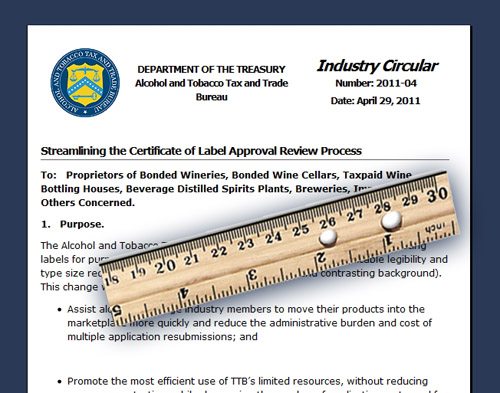 It may be safe to put away that gnarly old ruler, from fifth grade. A few days ago, TTB announced that it will ease up on scrutinizing your cpi’s and mm’s. At first this sounds like a good thing, and the “streamlining” as described — because many are the frustrations about waiting on a coveted COLA — only to find it lying in the tatters of rejection, because of a few letters too big or too small.
Industry Circular 2011-04 says:

In some ways this may be good, especially if it speeds up the system and makes TTB more efficient. But the main effect may be a shift of this not so trivial burden over to the applicant. There is no change to the various CFR rules requiring all your cpi’s and mm’s to be just right, and this Circular in no way mitigates that burden. In fact, TTB hastens to add:  “The responsible industry member has always been obligated to ensure proper labeling for their products. In order to remind industry members of their continued responsibility for compliance, TTB will now include a qualification statement on all COLAs consistent with the purpose of this circular.” A real-world and early example is here (see just below the signature). If you think it’s not fun to get a “needs correction” notice after a few weeks, saying a few letters are too small — compare it to the pain of being told the same after you shipped a few hundred thousand cases.

There is no shortage of changes at TTB in recent months. In addition to all the changes noted here and above, TTB also brought back (a somewhat more limited form of) label expedites a few days ago.