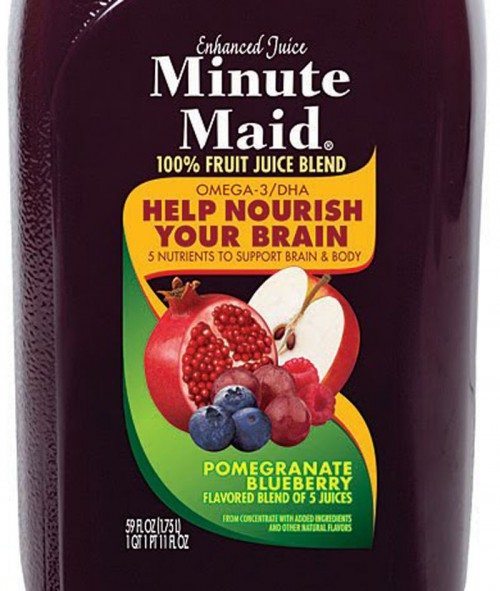 The U.S. Supreme Court, on January 10, 2014, agreed to hear Pom’s argument that Coke’s fruit beverage labels (such as the one at right) are misleading. The excellent FDA Law Blog has good coverage of the controversy here. Coke’s Minute Maid product only has a tiny amount of pomegranate juice — less than 0.5% — and so Pom (rather than the government) argues that this is misleading especially inasmuch as the labels show pictures of pomegranates. Pom’s superfamous lawyer argued:

This is a classic false advertising case. Pom and Coca-Cola compete directly in the market for pomegranate juices. Pom sells juices that—as purchasers would naturally expect—overwhelmingly contain actual pomegranate juice, which is sought by healthconscious consumers. Pom’s products include a pomegranate-blueberry juice. Coca-Cola sells and aggressively markets its competing “POMEGRANATE BLUEBERRY” juice, which it colors a deep purple and sells with a label containing a large image of each fruit. … Coca-Cola’s misleading label causes consumers to believe that the juice actually contains significant amounts of those fruits when in fact it contains only trivial amounts: 0.3% pomegranate juice and 0.2% blueberry juice. … Pom introduced survey evidence showing that consumers are in fact seriously misled.

Pom also quotes a key part of the government’s brief:  “Further, the ‘FDA does not approve... 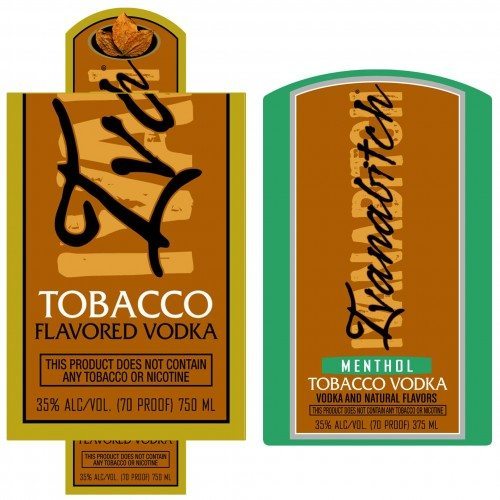 Turning against the tide of a great many cake and candy flavored vodkas, this brand has cut in the direction of something rather surprising — tobacco flavored vodka. Credit to Robert Back of International Spirits (Jacksonville, Florida) for pulling this off. It probably was not easy, and it comes complete with a disclaimer that THIS PRODUCT DOES NOT CONTAIN ANY TOBACCO OR NICOTINE. The regular, flavored vodka version is here. The menthol version is here (distilled spirits specialty). The company explains:

“With over 45 million people in the United States identifying themselves as smokers, our new tobacco flavored vodkas will be sure to find a niche in the already crowded flavored vodka market,” said International Spirits’ CEO Tony Elward. “We’re also confident that non-smokers will enjoy the new tobacco flavor product as our customers are always looking for the next big thing.” Ivanabitch Traditional Tobacco Vodka features a bold taste of smoky vanilla blended with sweet caramel. The Menthol Tobacco Vodka features the same taste as the Traditional Tobacco Vodka with a hint of mint. A product of the Netherlands, all flavors of Ivanabitch are formulated using all-natural flavorings, are 70 proof and five times distilled and then filtered over active charcoal.

Although I don’t think anyone should hold their breath...

FDA Not Ready For FSMA Renewals
by Robert C. Lehrman on October 2, 2012

Under the new and important Food Safety Modernization Act (FSMA), FDA was supposed to commence food facility re-registrations yesterday. This was mandated by section 102 of the FSMA law, enacted in 2011. This piece of the FSMA puzzle is not off to a propitious start. It was bad enough that there was not much guidance or clarity about how this would work, before the October 1, 2012 to December 31, 2012 re-registration period began. But it’s even worse that the brief window for required and biennial re-registration began yesterday — and yet there is still no means by which to accomplish what is required. The renewal website was briefly available last week, for a few hours, then it froze, then it disappeared, to be replaced with an oh so calm assurance that:

Biennial Registration Renewal for Food Facilities will not be available on October 1, 2012.  We therefore will not be accepting food facility registration renewals at this time.

FDA is delaying the registration renewals that are mandated under a 2011 law after the Grocery Manufacturers Association and numerous other trade associations recently sought guidance in meeting the registration requirements. “It would be extremely inefficient and costly for companies to re-register shortly after October 1st based...

We are starting to get a lot of questions about TTB’s future. Over the years I have marveled and wondered if Bill Clinton or George W. Bush spent much time pondering the fate of ATF or TTB (and, for example, the intricacies of the label approval process). Well, the Obama Administration clearly thinks about it a lot. Late last year, Wine & Spirits Daily wrote:

Obama’s Office of Management & Budget (OMB) is considering “the impact of folding TTB’s tax enforcement and collection functions into IRS, to be proposed in the Budget and implemented in FY 2013,” reports Kane’s Beverage News Daily. The TTB has until Dec 28 to submit a proposal to the OMB “analyzing the feasibility and appropriateness of this proposal, including a discussion of how the missions and goals of these two agencies could be combined.” Furthermore, TTB is to review whether its “regulatory and health-safety functions” can be transferred to the IRS or even the FDA.

Since then, there has been almost nothing in the press about this important story. As recently as today, Google News has not much of any consequence on this issue. I don’t see much on TTB’s website or newsletters. A few days ago, however, The Gray Report set forth some new information on this topic, and... 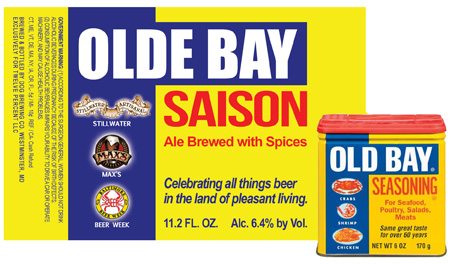 I do believe this Olde Bay Saison label raises at least a few legal issues. First of all, I sure hope the brewer had permission to use this famous branding. McCormick owns the Old Bay seasoning brand and probably would not have a sense of humor about any unauthorized uses. Even if the beer is loaded up with the same seasoning, and even if the reference tends to be flattering. I can not imagine that changing one letter (from Old to Olde) is likely to help any more. The total production for this ale with spices seems to have been tiny, so that may help somewhat more to avoid problems. A second legal issue is that, such a beer needs formula approval, before label approval and production. To get formula approval, it is usually necessary to provide a detailed ingredient list to TTB. It can be very difficult for anyone to get ingredient details (beyond what FDA typically requires on a food label’s ingredient list) about famous and protected products like Coca-Cola, Angostura Bitters, or Old Bay. TTB typically needs to check for artificial flavors, allergens, colors, and use-rate limitations, and this can be very difficult to do without a complete ingredient list of the sort that McCormick would be unlikely to provide to...

For the time being, Moonshot has ceased production due to [the FDA ban]. … Three of the products targeted are...