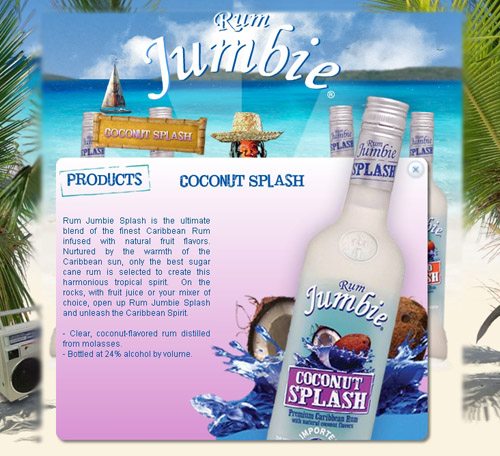 August 28, 2009 was a bad day for Rum Jumbie. In a slew of “approvals,” TTB directed Varela Imports to make “rum” much, much, less conspicuous. TTB said:

When new labels are printed, the word “rum” in your trademark name Rum Jumbie cannot appear more prominent than the Class and type. The [statement of composition] and the words Rum Jumbie must appear in the same color print. … No more use-ups will be granted.

That is, Varela must make their brand name and trademark much less conspicuous because this is not “rum” and the actual designation is “Rum with Natural Flavors.” TTB’s point, essentially, is that Varela is putting far too much rum in the Jumbie. This label emphasizes the rum aspect at least four times.
Jumbie has a trademark, and seems to have argued it here, to not much avail. There is little if any chance that the Trademark Office will come to the rescue and persuade TTB that there is not too much rum in the Jumbie. Also, the above image makes it pretty obvious that the product contains flavor.
It is not clear whether Varela has smashed into an aberration, or an evolving policy. On one hand “rum” is quite prominent and it’s not “rum.” On the other hand, back in 2004, a similar label was good enough under similar rules for the prior importer. Beyond that, spiced rum is in the same category (rum specialties) and it is common on such labels to emphasize the rum.